Eight things that should be included in screen guidelines for students

In The Conversation, CSU education experts Brendon Hyndman and Noella Mackenzie tackle one of the biggest issues that modern schools and parents encounter: how to manage students’ electronic use.

Commenting in The Conversation, CSU Associate Professor Mehmet Ozalp sees no immediate end to the current Syrian 'hell on earth' thanks to power struggles associated with the conflict.

Dr Troy Whitford, a lecturer in Intelligence and Security Studies at CSU, writes in The Conversation that the remake of the 1992 movie Romper Stomper reflects new schisms and complexities in contemporary Australian extremist politics. 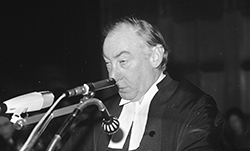 A CSU researcher has examined the highly complex and unprecedented judicial scandal about the conduct of Mr Lionel Murphy, a controversial former left-wing political figure in the Whitlam Labor government and later Justice of the High Court of Australia.