Band posters worth 'crowing' about

For more than 40 years Australian musicians and bands have been etching their names into the history books at the Crowbar at Charles Sturt University (CSU). 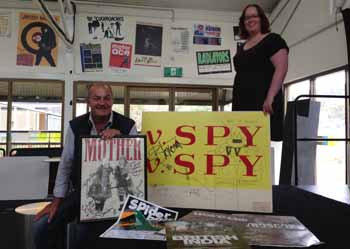 And now, the licensed venue for students at CSU in Wagga Wagga could almost be described as a shrine to the Australian music industry.

The promotional posters used to advertise upcoming gigs for CSU students have been carefully extracted from the archives, scanned, and hung in pride of place on the walls inside the Crowbar.

They give a snapshot of history that would excite any musicologist or music buff.

"Midnight Oil would be up there as one of the most significant acts to play here, along with INXS and Cold Chisel," the University's Student Services Events Coordinator Mr Roger Ansell said.

"In more recent times one of the bigger names to play here was Wolfmother, while the Crowbar was one of the first rooms to book Thirsty Merc.

"Thirsty Merc now loves Charles Sturt University and has been back four or five times since.

"The Crowbar has a great reputation, and that's what we aim for. We make sure that when a band leaves they want to come back and play here again."

Mr Ansell has spent many years in the Australian music industry, playing drums in his own bands as well as playing for many well-known artists such as Lee Kernaghan.

Ms Steele spent months collecting and collating data on the posters, describing search engine Google and past copies of the CSU student magazine Hungappa as her 'best friends'.

"I had to sort and catalogue the posters and find out as much information as possible. I found details like when the band played here, cost of entry, support bands and the location they played at," Ms Steele said.

"It's great to see the posters back up and on display because it shows people that Charles Sturt University has hosted some very prominent bands in Australia's history – it's like having a historical timeline on the wall."

As well as screaming Australian music history as loud as Jimmy Barnes would belt out Khe Sanh, the posters record a timeline of design and campus life.

Mr Ansell said, "They show Australia's design and artwork and the evolution of this over the years, with the introduction of better computer graphics and the quality of printing.

"It's also a great indication of campus life and what our students can get exposure to.

"Most of these bands only played one-off gigs at Charles Sturt University."

The band poster project has taken several years to come to life. Posters had to be removed; a rather delicate task for some due to their age and how well they were glued on to boards, from locations such as South Campus and the Convention Centre at CSU.

Some of the older, fragile posters remain in the CSU Regional Archives, but it is hoped they will be scanned one day and join the others on the history board.

So, next time you are in the Crowbar, take a look up and admire the history that's staring back at you, it's certainly something to crow about.

Media Note:
Contact CSU Media to arrange interviews with Student Services Events Coordinator Mr Roger Ansell and CSU student Ms Cecelia Steele and to view the posters in the Crowbar. Ms Steele's project was completed as part of the 2011-12 Summer Research Scholarship with the CSU Regional Archives. The Crowbar is a licensed venue within the Division of Student Services at CSU in Wagga Wagga. It is open Wednesday nights 8pm to late and Friday 2pm to 7pm in Building 20, near car park 2, Darnell Smith Drive at CSU in Wagga Wagga.