Charles Sturt staff and students contributing to their communities through volunteer work are among many that are celebrated in National Volunteer Week.

To celebrate National Volunteer Week, Charles Sturt University is sharing stories of three members of its community who volunteer their time and energy to help others amidst some of the country’s toughest times.

Staff and students at Charles Sturt University who are truly living the University’s ethos of creating a world worth living in are being celebrated and recognised during National Volunteer Week.

As a chance to celebrate those who give their time and energy to help others in need, National Volunteer Week runs from Monday 18 May to Sunday 24 May.

Two Bachelor of Paramedicine students in Bathurst and a communications co-ordinator for the Institute of Land, Water and Society in Albury-Wodonga are among the many Charles Sturt students and employees who contribute to their communities in a volunteer capacity.

It was Ms Angela Walsh’s father who encouraged her to join her local Rural Fire Service (RFS) brigade in Ourimbah in 2016.

Ms Walsh completed training and was quickly accepted into the team, rushing out to tend to smoke sightings, car accidents and buildings alight.

When she moved to Bathurst in 2018 to study a Bachelor of Paramedicine, she wasted no time in getting involved in the Bathurst brigade.

“This is where I feel I have grown the most,” she said.

“I have had so many challenging experiences on the fire ground and within leadership roles.”

Ms Walsh experienced the renown RFS comradery during her involvement fighting the devastating bushfires at the end of 2019 and start of 2020 on the Central Coast at Mangrove Mountain, as well as closer to Bathurst.

“These were once-in-a-lifetime fires, and even as firefighters, we were scared for what else could be thrown at us,” she said.

“Overall, the NSW RFS is a huge part of my life and I am forever grateful to be part of such a wonderful organisation.” ILWS communication co-ordinator Ms Margrit Beemster inquired about joining the Country Fire Authority seven years ago with some friends, who expected to be making sandwiches and helping with communications.

Ms Beemster discovered working behind the scenes was not enough and she is now the Yackandandah Fire Brigade’s 4th Lieutenant and publicity and promotions officer.

The role has its share of devastation on call-outs to motor vehicle accidents or witnessing the loss of wildlife and livestock from property fires.

But Ms Beemster said it is a rewarding organisation to be a part of, with community members waving as the truck drives down the street or receiving support from team members when tackling dangerous situations for the first time.

“While I have had other volunteer roles, being a volunteer firefighter has definitely been the most rewarding and, dare I say, exciting,” she said.

“I have found I really enjoy the personal challenge of being a firefighter, working as a member of a team and having the sense of helping the community in a very tangible way.” 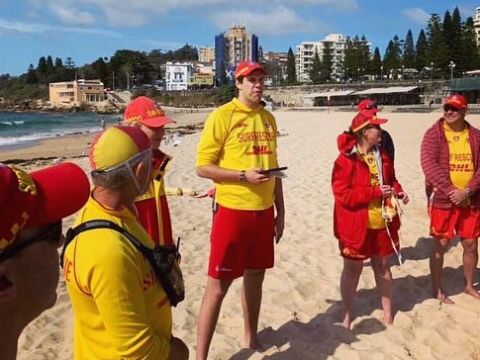 Second-year paramedicine student Mr Julien Vincent has been volunteering against the backdrop of Sydney’s beaches since he was eight years old.

He obtained his Surf Rescue Certificate in 2009 and has since extended his qualifications to become a current reserve active member of Coogee Surf Life Saving Club.

Mr Vincent is also a member of Surf Rescue 30, the Randwick District Offshore Rescue Boat, which patrols to coast and responds to distress calls.

“Volunteering is quite a special character in our nation’s identity,” he said.

“Growing up, Coogee Surf Life Saving Club was a second family, allowing me to connect and socialise with many people of all walks of life.

“It brought about a sense of purpose and serving the community, notably when I had the chance to save a life, which I did many times over the years.”

In addition to his work on the beach, Mr Vincent volunteers with Take Kare, formerly the Thomas Kelly Youth Foundation, which came through a placement opportunity offered by Charles Sturt.

He has provided assistance during busy periods for the organisation, such as New Year’s Eve and Mardi Gras, ensuring the safety and wellbeing of people in Sydney.

“Surf Life Saving and Take Kare are two movements where I get to put into practice the skills I’m learning in the Bachelor of Paramedicine at Charles Sturt University,” he said.