NRN celebrates 25 years of broadcasting in 2022 Charles Sturt's daily news service is celebrating a milestone in 2022 - 25 years on air in Bathurst.

National Radio News is celebrating a milestone in 2022 with the broadcasting service marking 25 years since it first went to air.

National Radio News (NRN) is a daily news service produced in partnership between Charles Sturt University and the CBAA broadcast from the 2MCE studios on the Bathurst campus.

The first broadcast was on March 31, 1997 and the service was officially launched by broadcaster George Negus on July 16, 1997. The service started with the support of the former School of Communication and Faculty of Arts as a valuable extension of the classroom experience of students studying broadcast journalism. A dedicated newsroom was established on campus and first supervised by Robert Elliot and Ben Hamilton, with the support of 2MCE Station Manager Ian Stanistreet.

Today, student journalists, cadets and interns from the Bachelor of Communication (with specialisations) work with professional journalists and News Director Mr Frank Bonaccorso to deliver hourly news bulletins broadcast to 1.5 million listeners a week across Australia.

Mr Bonaccorso said NRN is a long-running example of the authentic learning integrated into the communications degree.

“NRN equips students with the skills to find the stories that matter to modern audiences with a focus on regional Australia. They source talent, produce and edit interviews, write copy, and present on-air,” he said.

“Alumni work in newsrooms across the country including ABC, ARN, 2GB, SCA, and Channel 7, 9, and 10. Many students involved with NRN are employed before they graduate.”

“Students are the heart and soul of NRN. They willingly give their time not only to throw themselves into the practical mechanics of broadcast news but to springboard their quest for meaningful roles within the Fourth Estate.”

Third year communication student Emily Francis said, “I moved from Tasmania to study communication at Charles Sturt University based on the reputation of the course and the partnership with the CBAA for National Radio News.”

Charles Sturt produces 84 bulletins per week and can be heard around Australia on almost 100 community radio stations, from Kununurra, across the Top End, and down to Tasmania. 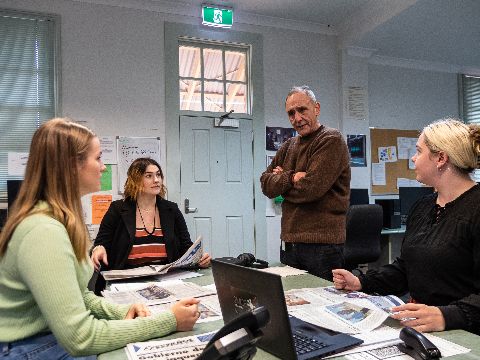 National Radio News provides timely, relevant news from across the country and across the world, with a dedication to being a counterpoint to the commercial news services. Built on the community broadcasting sector’s principles of democracy, independence and access, NRN has no commercial ties or political agenda, and covers stories often overlooked by commercial services.

NRN is connected to community radio newsrooms across Australia and colleagues internationally. The service has expanded in recent years with the establishment of a Canberra bureau, with political correspondent Amanda Copp joining the team.

NRN bulletins can be heard seven days a week from 6am to 7pm on weekdays and 6am to 12pm on weekends.

National Radio News is supported by the Community Broadcasting Foundation.