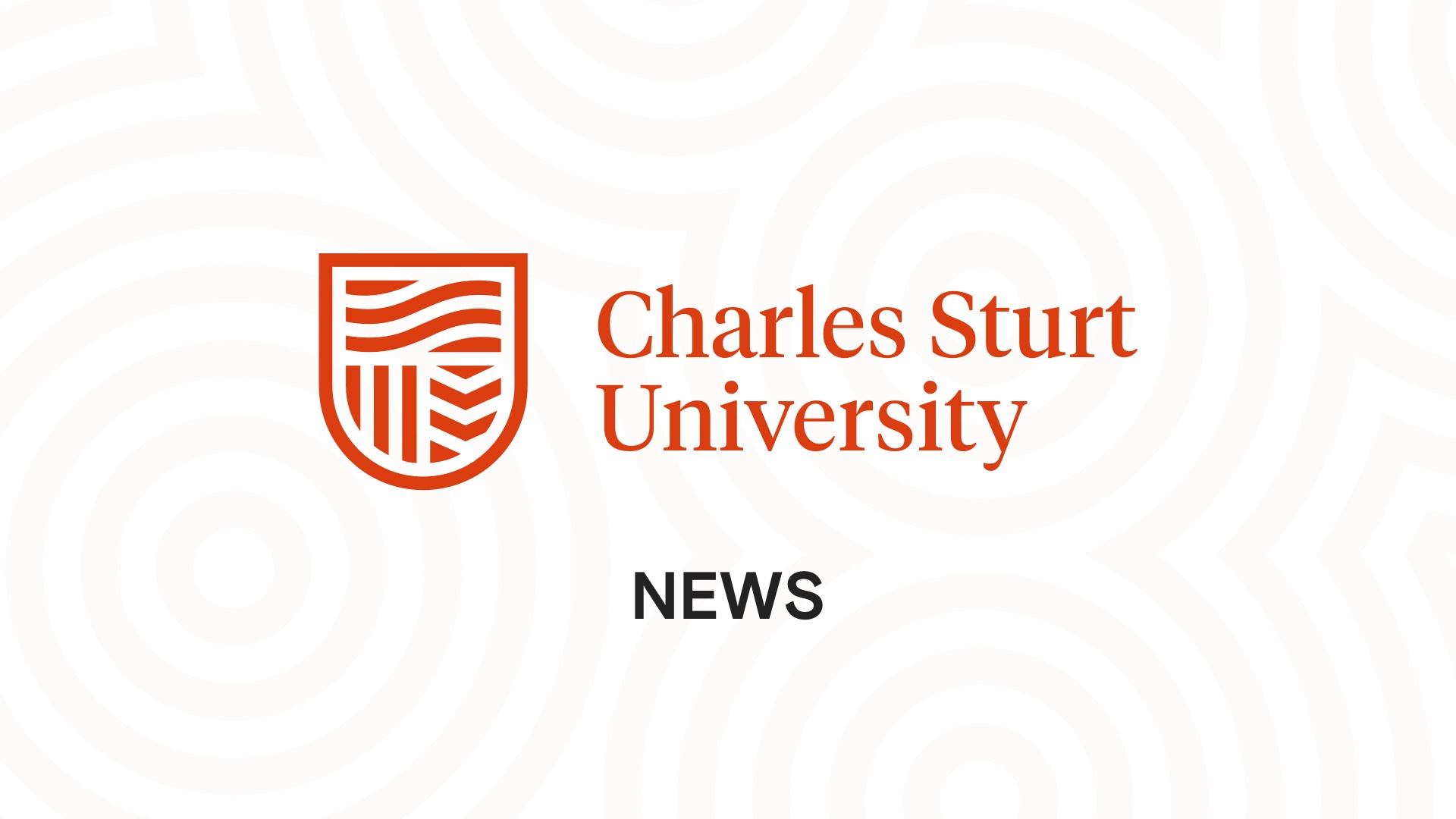 Charles Sturt University (CSU) Winery will launch a new-look series of labels for its Charles Sturt and Reserve ranges at CSU in Bathurst on Tuesday 1 October. Marketing manager Mr Justin Byrne said the new labels reflected the University’s history and spirit of exploration. “The labels feature the rivers of regional NSW, the Macquarie, the Murray, the Murrumbidgee and the Darling,” he said. “It was the explorer Charles Sturt who first traced the Murray and the Murrumbidgee, and those journeys are also represented on the labels.” Mr Byrne said Charles Sturt University Winery had been making wine, and winemakers, for more than 35 years. “We own and operate two vineyards, growing warm climate varieties in Wagga Wagga and cool climate varieties in Orange, and also work with growers in other regions. We have two production facilities in Wagga Wagga; a commercial winery producing our three product ranges and an experimental winery producing our student wines.” CSU staff and local business people will attend the launch event and the new labels will be on shelves throughout NSW and Victoria in the coming months.

Charles Sturt University (CSU) Council has welcomed the appointment of three new highly successful alumni to its ranks. Mrs Jennifer Hayes from Albury-Wodonga is a former senior executive of the Mars Corporation, including as a senior financial executive in Asia Pacific and Europe.  Ms Saranne Cooke from Bathurst joins the Council from the energy sector and recently led a team working on energy sector reform in NSW.  Ms Cooke is also a Director of the Western Medicare Local.  Mr Jamie Newman from Orange is a member of a number of boards and committees, and is currently the Chief Executive Officer of the Orange Aboriginal Medical Service. He is a descendent of the Kalar tribe of the Wiradjuri nation.  The new appointees join current CSU alumni members Mr Angelos Frangopoulos (CEO of SkyNews Australia and Board Member of the Victor Chang Foundation) and Mr Peter Hayes (a Wine Industry Consultant who has held senior positions with the CRC for Irrigation Futures, CRC for Viticulture and the Grape and Wine Research and Development Corporation).  The Council also welcomed Mr Robert Fitzpatrick, an external independent appointee, who currently heads up the infrastructure, transport and logistics business with the National Centre of Excellence in ICT Australia and spent 7 years in global consulting for McKinsey in international business and technology. Under the leadership of Chancellor Mr Lawrence Willett, AO, the CSU Council has 15 members.

Is a 'green' roof good for you?

How proximity to a 'green' roof or wall affects city residents is the subject of a research project being carried out in Sydney by Charles Sturt University (CSU) student, Ms Karina Maloney. The Honours student in the School of Environmental Sciences at CSU in Albury-Wodonga is investigating residents living in or near a building that has plants growing on roofs or outside walls, and the impact it has on residents’ perceptions of the local landscape and their health. "As more Australians move to the city, the role of nature in the urban environment has become increasingly important," Ms Maloney said. "To learn more about the role of nature in urban areas, we are conducting a survey of residents in one of the three groups: those that reside in a building with a ‘green’ roof or wall; those that can see the vegetation of a nearby green roof or wall; and those that live in a nearby building and cannot see green roof or wall vegetation. We are looking for relationships between the three groups of residents in their satisfaction in the surrounding landscape, their connection to nature and their physical health.”

Charles Sturt University (CSU) will close for the Christmas-New Year break from 12.30pm on Friday 21 December and will re-open on Wednesday 2 January 2013. Best wishes to all our readers from the CSU Media team.

Meeting and learning on Wiradjuri land

Nguluway, the Wiradjuri word for ‘Meeting with Each Other’, is the title under which Indigenous staff from across Charles Sturt University (CSU) will meet this week for their annual conference. About 30 Indigenous staff are expected to attend the two-day event at the Convention Centre at CSU in Wagga Wagga from Wednesday 11 August to Thursday 12 August. Wiradjuri Elder Aunty Flo Grant will give the Welcome to Country from 9.20am on Wednesday 11 August. CSU Vice-Chancellor and President Professor Ian Goulter will address Nguluway at 9.30am and the Indigenous dance group from Wagga Wagga Maliyaa, will perform at 10am. Indigenous Elders and community members will join CSU staff for these sessions of Nguluway. The University’s Australian Indigenous Employment Strategy aims to increase the proportion of Indigenous staff in continuing positions and boost the overall representation of Indigenous staff to three per cent. Read more about the strategy here.

Investigating Asperger's in the community

Asperger’s syndrome is a complex condition covering a range of symptoms that include communication difficulties and problems with social interaction and cognitive abilities. Little is known about community views on this condition, which Charles Sturt University (CSU) doctoral student Ms Donna Kite will address in her current research project. Based in Port Augusta in South Australia, Ms Kite is looking for people to complete an online survey on the characteristics, causes, treatment and management of the condition. “Changes are being proposed on the diagnosis of Asperger’s, which could have implications for its subsequent recognition and treatment, so I am also asking respondents for their opinions on the proposed change,” Ms Kite said. “Most clients with Asperger's syndrome have adequate communication and cognitive functioning to participate in regular school programs, employment and sporting activities, but experience social and often behavioural difficulties relating to their interpretation of the world.”

For outstanding service to rural health

Charles Sturt University’s (CSU) Ms Stephanie Frazer has won a national award for her services to a student rural health club. Ms Frazer, who is president of the CSU Multidisciplinary Albury Rural Health Society (MARHS), was awarded $1 000 by the National Rural Health Students Network (NRHSN). The Network recognised her significant involvement in helping build MARHS into a strong and active club, particularly in relation to mental health in regional Australia. “Improving awareness about mental health is important as almost half of all Australians will experience mental illness in their lifetime. We can make a difference by encouraging understanding and improving support. I feel humbled to be recognised by my fellow students and to work with such great people at Charles Sturt University,” Ms Frazer said. Ms Frazer, who is a third year physiotherapy student with the School of Community Health based at Thurgoona, received her award in Alice Springs in July during the Network’s national conference of 29 student rural health clubs. MARHS vice-president and second year occupational therapy student Mr Alan Dyason also won a prize at the conference for his contribution to increasing awareness and action in Indigenous health issues.

One of Charles Sturt University’s (CSU) most senior academics is among those honoured for his years of service to CSU and its predecessor institutions. The Deputy Vice-Chancellor (Academic) Professor Ross Chambers is one of 13 staff eligible to receive 20 and 30 year service medals during a ceremony on Friday 11 September in the Convention Centre at CSU at Wagga Wagga from 12.30pm. Professor Chambers joined the Riverina College of Advanced Education (RCAE) in 1979 as an Associate Lecturer in history and politics after studies at the University of Sydney and the School of Slavonic and East European Studies at the University of London.  He was appointed a Principal Lecturer at RCAE in 1987.  Following the creation of CSU in 1989, Professor Chambers was appointed Head of the School of Humanities and Social Science and in 1992 the Dean of the Faculty of Arts.  In 2002 he was appointed to his current position as Deputy Vice-Chancellor (Academic). “It has been a great privilege to be part of the development of Charles Sturt University and to work with the community of staff and students at the University,” said Professor Chambers. “I have especially appreciated being part of an organisation with a strong commitment to the values of equity in access and participation and of service to its communities.”

In a world saturated with advertising and media using sex to sell, a Charles Sturt University (CSU) academic has warned of the long-term risks for children. Dr Emma Rush, Associate Lecturer in the School of Humanities and Social Sciences says companies are increasingly marketing their products to children to capture the children’s allegiance to their brands. However she says some products, like padded bras for eight-year-old girls, are completely inappropriate.”Big companies make products to make money, but the clothing, magazines, toys and games are becoming increasingly sexualised,” said Dr Rush. The CSU academic is a contributing author to a new book, Getting Real: Challenging the Sexualisation of Girls. The book deals with the sexualisation and objectification of girls and women in the media, popular culture and society. “Experts are seeing psychological damage in younger and younger children and a rise in behaviours such as low self-esteem, depression, self-harms and eating disorders. The children should be out in the world having fun. They should be constructing themselves, rather than squashing into a narrow stereotype,” said Dr Rush. “As adults we have responsibilities for children’s health and development. It is wrong to think of premature sexualisation as simply a matter of taste; the fact is that it has risks for children.”