Research for small farmers in Pakistan

A CSU student has set his sights on filling an annual forage production gap for smallholder Pakistani farmers by equipping them to successfully grow improved seed for quality forage production.

A Charles Sturt University (CSU) student has set his sights on filling an annual forage production gap for smallholder Pakistani farmers by equipping them to successfully grow improved seed for quality forage production. Mr Muhammad Shoaib Tufail is doing his PhD through the University's School of Animal and Veterinary Sciences in Wagga Wagga in regional Australia.

His project, funded by the Australian Centre for International Agricultural Research (ACIAR), aims to develop local forage seed enterprises to provide high quality seed to enable smallholder dairy farmers to produce sufficient forage to maintain the productivity of their animals throughout the year.

Mr Tufail said, "There are about nine million smallholders farmers in Pakistan. They typically have two to three hectares of land and a few animals to produce food and income for their families.

"However, there are annual forage gaps totalling four months of the year when the smallholder farmers are unable to produce sufficient fodder for their livestock, including the depths of winter and again at the height of summer.

"I wanted to introduce improved forage seed to increase fodder and seed yields per hectare at least cost to the producer.

"I chose berseem clover for my study as this is the forage used mostly over the winter months in the Pakistani province of Punjab. We also knew that there was a lot inferior seed used by farmers in this region.

"In our program, smallholder farmers learn the art of seed production starting from seed selection to seed harvesting, which then will allow them to establish their own village-based forage seed enterprises (VBFSEs).

"This not only increases their farm productivity by reducing fodder shortage but also generates extra income for the profitability and sustainability of their farms."

As part of his research, Mr Tufail selected five farmers in the two districts of Kasur and Okara in Punjab. 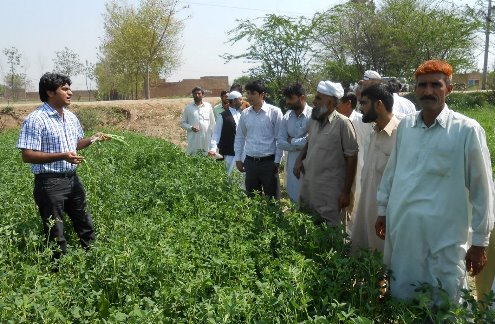 In 2013 and again last year he worked with the farmers to select the best variety of berseem clover (from local and improved seed), and a package of agronomic practices suited to the farmers' needs and the environment to improve the production of quality forage and seed.

"My research has found that the improved seed obtained from a government plant breeding research station provided the best seed and forage production across all the farmer research sites.

"We produced up to 13 tonnes of dry matter and more than 420 kilograms of quality forage seed from one hectare of land.

"Remarkably we found that  the introduction of honeybees to increase the efficiency of pollination more than doubled seed yields, which demonstrated for the first time in Punjab  that  there is a clear shortage of honeybees in this environment.

"This may be due to the liberal use of insecticides on the agriculture farms.

"The five VBFSEs we have established in two districts of Pakistan produced 870 kilograms of quality seed of berseem clover which is sufficient to grow fodder on more than 40 hectares of land.

"These five seed entrepreneurs generated up to 420 thousand rupees per hectare (5,500 A$/ha) income through their seed marketing VBFSEs, which is 3 to 4 times higher than they earn from any other cash crop grown in the region.

"If the development of a local seed enterprise at the village level works in Pakistan then it has the potential to work for smallholder farmers throughout the developing world."

Muhammad Shoaib Tufail is a PhD student in the CSU School of Animal and Veterinary Sciences at CSU in Wagga Wagga. He is also working as a research assistant in a Meat and Livestock Australia (MLA) project, on developing and understanding of the photosensitisation in sheep caused by Biserrula species. He is also a member of the Graham Centre for Agricultural Innovation, a research collaboration of CSU and NSW Department of Primary Industries.

You can view more on his PhD project here.

Mr Tufail took part in the Three Minute Thesis Competition at CSU earlier this year, with his presentation entitled "Village-based forage seed enterprises through farmer participatory research". He finished in the top three.

Mr Tufail completed his Masters in Agronomy from the University of Agriculture Faisalabad (UAF), Pakistan and joined Dairy Pakistan where he worked as regional manager and provided dairy extension services to the farmers for four years before he came to Australia. He completed a postgraduate certificate from CSU in 2009-2010. He has also worked with DairyNZ (New Zealand) and Uardry Merino Stud at Hay in NSW and other Australian farms for short periods to develop his skills and understanding of Australian agriculture, dairy, sheep and beef enterprises.