Eight CSU theatre/media students will add their newly-created performance to a collaborative touring production for children performing Bathurst this week. 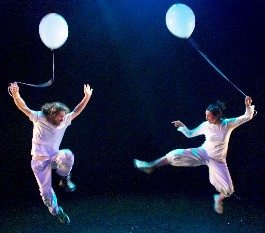 Researcher, lecturer and director in theatre/media in the CSU School of Communication and Creative Industries Mr Dan Aubin said the 43-minute visual theatre production The Moon's a Balloon is designed to intersect with and accommodate local creative initiatives wherever it is performed.

"This show is a success as a piece of art, an internship, a directorial collaboration, a research space and a community development project due to how it brings together so many different artists, students, teachers, venues, and audiences," Mr Aubin said.

"Research and professional connections through opportunities such as this are an important way for universities to stay ahead of the curve. Theatre-making methods developed through this project have even influenced the development of curriculum in the popular theatre/media course at Charles Sturt University."

A CSU 'Performer Intersect' group named 'Tessellation' (which references the idea of different pieces fitting together) has been rehearsed by Mr Aubin to join the production in Bathurst. This follows on from previous 'Intersects' for a choir and an audience which have joined the production elsewhere.

Mr Aubin is researching innovative creative processes that make great art and bring 'communities of interest' together. The performance of The Moon's a Balloon in Bathurst on Wednesday 22 and Thursday 23 July at the Bathurst Memorial Entertainment Centre (BMEC) is the outcome of a three-year CSU collaboration with two recognised leaders in community engagement, including the show's director Mr Dave Brown from Patch Theatre in Adelaide and Mr Stephen Champion, manager of BMEC.

"The Moon's A Balloon is a beautiful piece of visual theatre," Mr Aubin said. "It is imaginative, magical, moving and funny, and represents the way children play and the way they can imagine and invent so creatively."

Mr Aubin is also studying the way Mr Brown uses collaboration, co-creation and participation, and is interested in his concept of 'open source' theatre-making.

"Dave's creative generosity is rare indeed and on this occasion the Bathurst community is richer for it," Mr Aubin said.

"Dave has opened up spaces in an established show for the CSU Intersect (and other Intersects) to fit in their own interpretation and extensions of the magical world of The Moon's a Balloon.

"His methods are cutting-edge in the way they enhance art-making and bring together people from different organisations, states, countries and fields. This interdisciplinary approach is what I am interested in as a researcher in theatre, communication, creativity and physical cultural studies in the CSU School of Communication and Creative Industries."

The Moon's A Balloon is inspired by an EE Cummings poem of the same name, which suggests that amazing possibilities can come from the simplest of things. It received critical acclaim at the 2013 Come Out Festival in Adelaide.

The Moon's A Balloon is intended for five to eight year-olds and will be performed at 6.30pm Wednesday 22, and at 10am and 1pm Thursday 23 July at the Bathurst Memorial Entertainment Centre, William Street, Bathurst.