Music and images come together 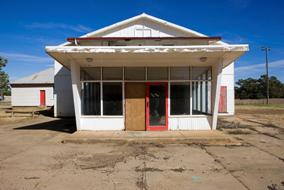 The exhibition and performance, Civic Melancholy, Brackish Songs, will debut at The Laycock Street Theatre in North Gosford on Saturday 28 February.

Mr Holcombe, a lecturer in photography and digital imaging at the CSU School of Communication and Creative Industries in Wagga Wagga, said the project is a non-traditional collaboration, in the form of photography and music composition.

"Chris Sainsbury has written a musical composition based on my photographic project, Civic Melancholy," he said. "I've responded with photographic images inspired by Sainsbury's Brackish Songs song cycle, a series of songs based on a theme particular to his region.

"We came together through a common interest in mediating the experience of place. This project challenges the rhetoric of the parochial, which is so often aimed at the people of regional Australia.

"It also replaces the tired local colourists who advocate and express romantic notions of regional life, usually and ironically from our cities."

The project received $15 000 in funding through the NSW Art Central Regional Creative Industry Program and brings together artists from two different regional areas.

"We are so bombarded with photographic images in our everyday lives that we rarely get the opportunity to give them more than a casual glance," Mr Holcombe said.

"Likewise, music has become a soundtrack to our lives, often playing in the background, but rarely truly listened to.

"Chris's music has created a unique context for serious contemplation of my photographs.  In response, the quietness of my still images offers an audience a reflective platform for Chris's compositions."

The Civic Melancholy half of the project will be featured at the 2015 Kangaroo Valley Arts Festival with the piano component performed by world-renowned pianists Simon Tedeschi and Kevin Hunt.

Dr Sainsbury is a lecturer at Eora College, Sydney Institute, and a prominent contemporary composer based on the NSW Central Coast.

Civic Melancholy is the basis of Mr Holcombe's PhD, which will culminate in a major photography exhibition, Civic Malaise at the Wagga Wagga Art Gallery in 2015.

Civic Melancholy, Brackish Songs will open at the The Laycock Street Theatre in North Gosford at 8pm Saturday 28 February and at The Grove, Wyong, at 8pm Saturday 7 March. Contact CSU Media to arrange interviews with Mr Jamie Holcombe.