Popular film as a teacher

Challenging the predominant view in the media about popular culture affecting young people only in detrimental ways, the research of a PhD recently awarded to a CSU lecturer argues that popular culture engages young people in complex and multiple lessons about identity and their place in the world. 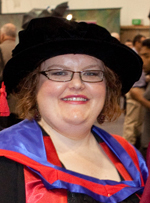 Challenging the predominant view in the media about popular culture affecting young people only in detrimental ways, the research of a PhD recently awarded to a Charles Sturt University (CSU) lecturer argues that popular culture engages young people in complex and multiple lessons about identity and their place in the world.
Dr Kristina Gottschall, a lecturer at CSU School of Teacher Education in Bathurst, says cultural studies-education theories about the possible effects of cinema on audiences mean that greater attention needs to be paid to how film might work as a social and cultural teacher.
“As a context where we learn about the self, our culture, and our place within it, popular film is a powerful space, one that gives rise to a complex set of relationships in terms of how the individual thinks about themself and asserts their identity,” Dr Gottschall said.
“Far from simply transmitting messages, the knowledge and forms of address in popular film can be taken up, invested in and challenged in a myriad of ways.”
Dr Gottschall argues in her thesis titled- ‘May you live normally ever after!’ - Popular Film as Pedagogy: Youth, Subjectivity and Australian Cinema – that popular film is one way in Western culture of making and remaking the subject along ‘particular normative trajectories’. Her research focused on ideas of ‘youthood’ and youth coming-of-age in a range of post-1980 Australian films, and related film culture.
“In my first chapter, I critically examined the quintessential youth(ful) figure of Australian film actor Ben Mendelsohn, including a range of his films, and a host of publicly available data including interviews, reviews and promotional material,” Dr Gottschall said. “What I argue is that it is useful to think of ‘Ben Mendelsohn’ as an instructive text, a ‘spectacular teacher’, who blurs worlds on and off the screen, inciting us to revisit a kind of young, masculine, roguish, destructive subject: the young male larrikin that we see time and again in the Aussie imaginary.”
As well as analysing Mendelsohn’s filmography in terms of themes relating to suburbia, work, girls, love and sexuality, motherhood, and mateship, she also examined films regarding ‘girlhood’, including Peaches (2004), Somersault (2004), and Caterpillar Wish (2006).
“I explored how the young female protagonists here embody lessons about being ‘rational’ and ‘normal’ women, and how they may or may not meet certain societal expectations,” Dr Gottschall said. “I also focus on how audiences might come to understand the ‘bad girl’ protagonist, Katrina, in Suburban Mayhem (2006), a cult film about a young teen-mother from the suburbs who orchestrates her father’s death to gain the inheritance.
“I show how a range of filmic designs and practices are linked to potential learning about the young female subject, and the costs of forming the self in particular ways.
“Lastly, I explored questions of ‘generation’ and, through analysis of The Rage in Placid Lake (2003), Hey, Hey It’s Esther Blueburger (2008), Crackers (1998), Spider & Rose (1994), and Blurred (2002), how it is constructed as a commonsense battle between ‘young’ and ‘old’. How these films, and others like them, invite audiences to enter into and play along with these particular age-based games of subjectification, is the ongoing focus on my research.
“Seeing popular film culture as a complex and often contradictory teacher ideally opens up different and diverse ways of thinking about youthhood, and ultimately what is possible for young people in the creation of viable and happy lives,” Dr Gottschall argues.