A research project involving a Charles Sturt academic has been included in the 2021 NSW Research Impact Showcase.

A Charles Sturt University researcher has been recognised for her involvement in the 2019 rodent eradication on Lord Howe Island, with her work recently named in the 2021 NSW Research Impact Showcase.

Charles Sturt Institute for Land, Water and Society member Associate Professor Melanie Massaro led a team of researchers that were part of a bird conservation project during the largest rodent eradication program ever attempted on an inhabited island.

The primary objective of the conservation and management program led by the Lord Howe Island Board and the Science Division of the NSW Department of Planning, Industry, and Environment (DPIE) was to remove more than 300,000 rats and mice from the island in a bid to restore its natural biodiversity.

The research project was selected by the NSW Chief Scientist and Engineer for inclusion in the 2021 NSW Research Impact Showcase.

The showcase was established by the NSW Deputy Vice-Chancellors (Research) Committee to highlight the important research being conducted by universities across the state.

Professor Massaro was involved in the initiative from the beginning, studying the threatened Lord Howe currawongs to mitigate any possible negative effects of the baiting program on native birds.

“It is great honour to be selected for inclusion in the 2021 NSW Universities Research Impact Showcase,” she said.

“This project on Lord Howe Island was a truly collaborative effort between researchers of the Science Division of the NSW DPIE, the Lord Howe Island Board, Taronga Zoo and Charles Sturt University in order to preserve Lord Howe’s unique biodiversity for future generations.”

As the extensive baiting with brodifacoum during the eradication posed a real risk to the enigmatic threatened Lord Howe woodhens and currawongs, significant numbers of these threatened birds had to be placed into captivity during the baiting period until the poison pellets had disintegrated sufficiently to avoid ingestion by wild birds. 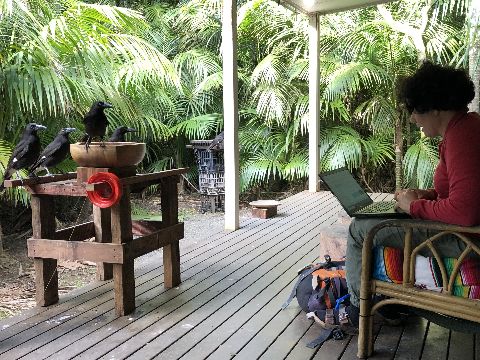 Professor Massaro helped scientists of the Science Division to capture those birds, while Taronga Zoo staff cared for those birds during the rodent eradication.

The trio are based at the Charles Sturt ILWS research centre in Albury-Wodonga.

Over the past four years, Professor Massaro and Mr Segal have collected data on the currawong’s survival, nesting success, habitat use and diet to measure how the rodent eradication affected this species.

“Because currawongs are omnivores and they forage on fruit, insects, other birds and rodents, there was a risk of losing some to secondary poisoning,” Professor Massaro explains.

Findings from this research can be used to assist and inform future eradication programs by identifying non-target mortalities and documenting unexpected ecological outcomes.

It can also educate the public and island stakeholders on the beneficial outcomes to island ecosystems and demonstrate a return on investment from funding bodies.

For more information or to arrange interviews with Associate Professor Melanie Massaro, contact Nicole Barlow at Charles Sturt Media on mobile 0429 217 026 or news@csu.edu.au