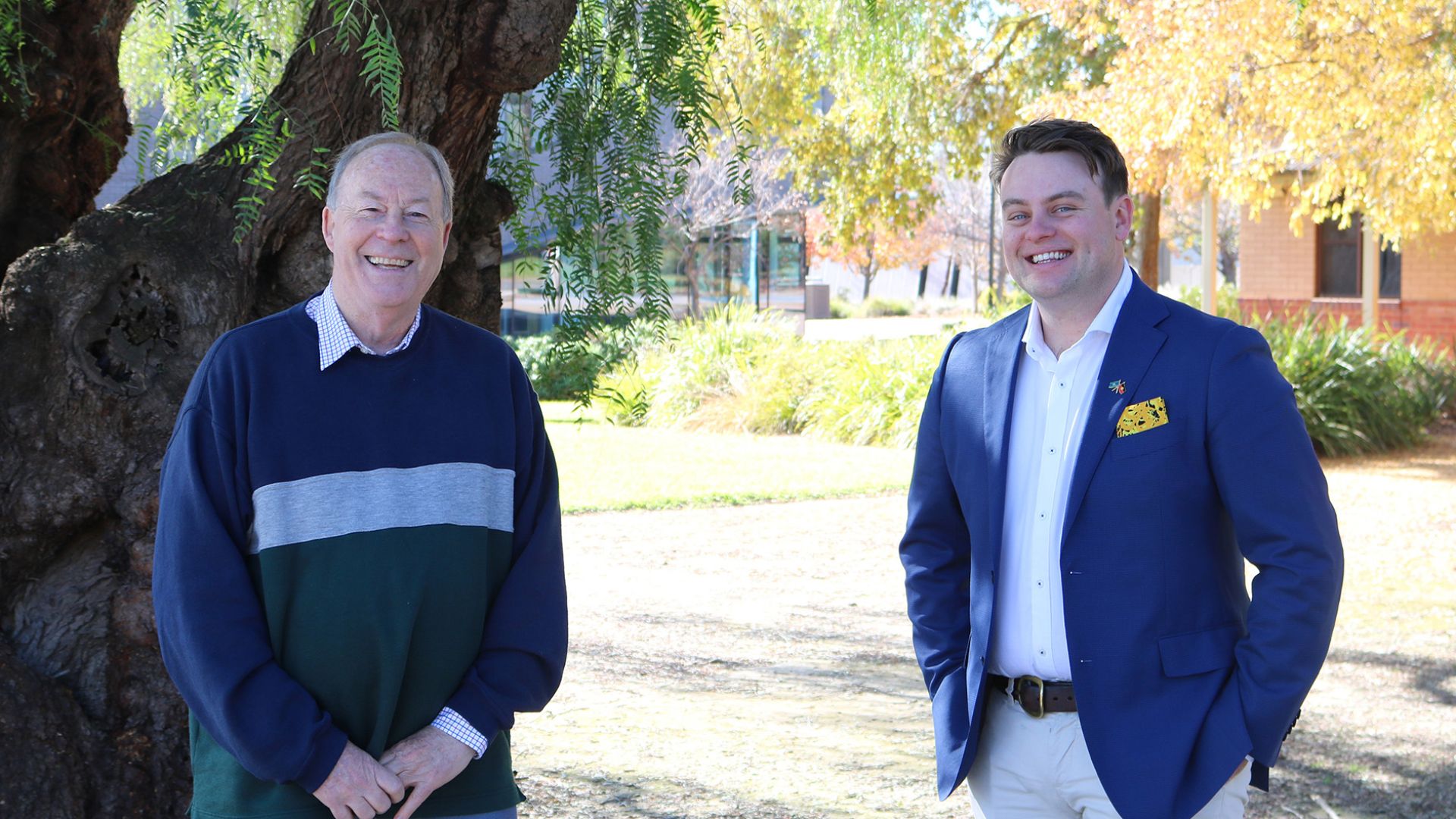 A new Charles Sturt University initiative is based on the belief that Australian agriculture cannot afford to ignore the learning of the Indigenous people who have been managing the landscape for thousands of years.

A new Charles Sturt University initiative is based on the belief that Australian agriculture cannot afford to ignore the learning of the Indigenous people who have been managing the landscape for thousands of years.

The Indigenous Agriculture Initiative plans to support Indigenous students in pursuing a career in agriculture, while contributing to research about Indigenous agricultural and land management practices with a goal of integrating these cultural learnings into Charles Sturt agriculture courses.

The driving force for the initiative is the Graham Centre for Agricultural Innovation's Professor Jim Pratley (picture left in photo), who says the initiative has the capacity to facilitate greater participation of Indigenous people in the agricultural sector where they have been under-represented for generations.

“At Charles Sturt University, we believe the preservation and integration of Indigenous land management into contemporary agriculture study and research has the potential to create better outcomes for all,” Professor Pratley said.

“This initiative aims to bring the two cultures together to bridge the gap, to understand where they agree and disagree, to build respect, and to identify synergies,” he said.

To test his hypothesis, Professor Pratley researched and presented a paper to a conference of industrial agriculture experts, and found there was great interest and support for his findings and proposal.

“I also recognised that just one scholarship was not enough and there needed to be a systematic approach, to create a continuous cohort of Indigenous undergraduates leading to industry employment and in some cases research higher degrees,” he said.

“To this end, with the assistance of the Charles Sturt Foundation, we have developed a proposal and are actively seeking additional financial support for the initiative beyond the initial contributions we have received from Indigenous organisations and other benefactors.”

The inaugural research higher degree student in the program is Mr Josh Gilbert, a young Worimi man with an agricultural story stemming from Indigenous land management to modern agriculture.

Mr Gilbert (pictured right in photo) was Australian Geographic 2016 Young Conservationist of the Year, among other achievements which can be found here.

“I am truly inspired by Charles Sturt University’s ability to lead a dialogue regarding Indigenous agriculture,” Mr Gilbert said.

“Over the past few months, the University has shown a deep empathy to work with our communities and listen to our experiences and dreams.

“As significant (40 per cent) land owners still of this country today, I see my role through my study at Charles Sturt University to provide our perspective on agriculture, while defining Indigenous agriculture into the future.

“The initiative shown by Charles Sturt University in developing this program has the potential for Australian agriculture to leapfrog our thinking and discussions in this area, particularly to empower Indigenous peoples in the space to speak on our own behalf.”

The Indigenous Agriculture Initiative has already gained the support of private donors who have committed more than $100,000.

The University seeks others who are passionate about agriculture and Indigenous outcomes to support this important initiative. For more information and to contribute contact the Charles Sturt Advancement Office on (02) 6933 2067 or email advancement@csu.edu.au