Charles Sturt researchers find grey snake in Murrumbidgee wetlands, the first sighting of the animal in southern NSW for 65 years.

A chance finding of a population of endangered grey snakes in the Lower Murrumbidgee has prompted a Charles Sturt University academic to research the animal’s habitat requirements and movement patterns.

Postdoctoral researcher with the Charles Sturt Institute for Land, Water and Society (ILWS) Dr Damian Michael was conducting a nocturnal frog survey south of the Murrumbidgee River when he sighted the first grey snake.

“This small nocturnal frog-eating snake had previously not been recorded in southern NSW for 65 years,” Dr Michael said. 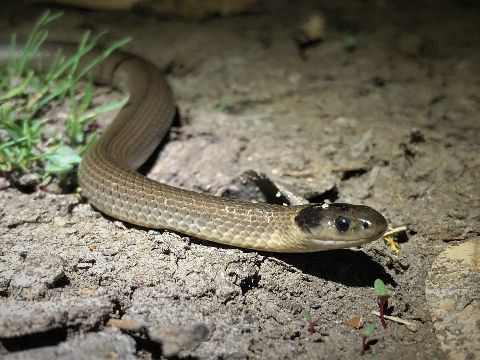 In the past two years there have been more than 30 individual sightings of the Hemiaspis damelii, a small venomous elapid snake usually found in northern NSW and Queensland, from five different wetlands south of the Murrumbidgee River.

The sightings were made by chance during observations as part of the Murrumbidgee MER project by researches Dr Michael, Associate Professor Skye Wassens, Dr Andrew Hall and Ms Gaye Bourke from the ILWS.

The grey snakes were spotted foraging for frogs in well-vegetated wetlands after varying degrees of rainfall, which prompted Dr Michael to initiate research into their presence in south-west NSW.

The study began in the summer of 2019/2020 and aims to address two main areas: the snakes’ relationship with wetland vegetation and hydrology, and the snakes’ population density and movement patterns.

Snakes are caught by hand, micro-chipped, weighed, measured and sexed before being released.

“We hope to encounter the snakes we have microchipped again so we can calculate growth rates and population estimates,” Dr Michael said.

“We have 12 fixed sites – where we are monitoring frogs anyway – but when there is no water or very little water in the wetlands, it is near impossible to find the snakes active on the surface.”

The snakes have been found living in soil cracks during the day.

Charles Sturt Honours student in the ILWS Ms Emma Stevens is studying the relationship between where the snakes are found and the abundance of variables, such as frog diversity and wetland hydrology.

The study on the snakes is expected to run for five years, the same duration as the MER project.