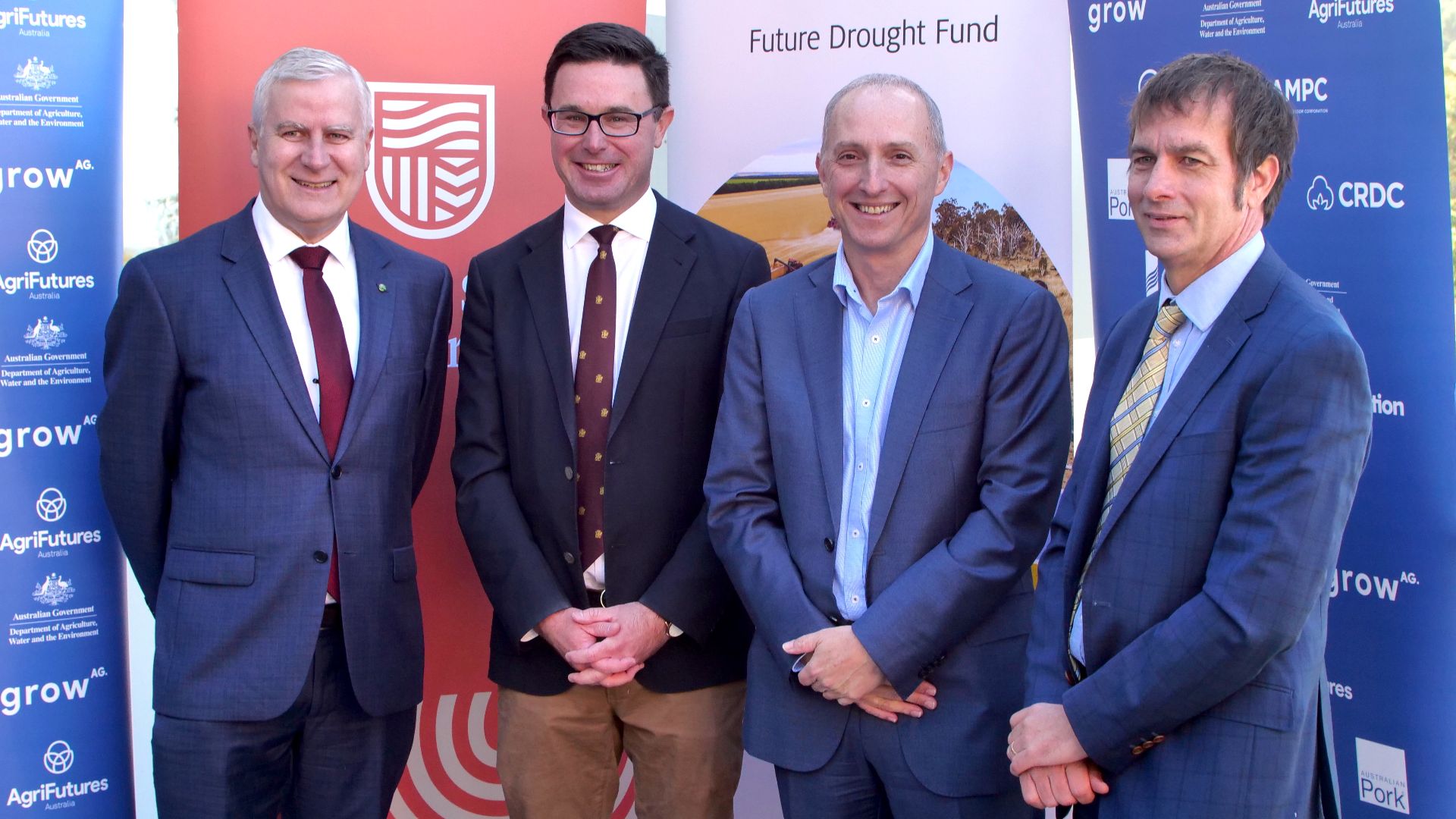 A bid led by Charles Sturt University has been awarded a multimillion-dollar grant to establish a Drought Resilience Adoption and Innovation Hub at the University’s Wagga Wagga campus.

The Southern NSW Drought Hub will be one of eight across Australia which will enable user-centred agricultural innovation and research under the Department of Agriculture, Water and the Environment's Future Drought Fund.

The project will receive $8 million in operational funding over four years and will be centred at the Agrisciences Research and Business Park at Charles Sturt in Wagga Wagga.

The Drought Hub will be a consortium of research providers – including Charles Sturt - and users who will work collaboratively to address local drought resilience research and innovation priorities, with the core aims of ensuring research is useful and accessible for primary producers and increasing opportunities to commercialise innovation. The Drought Hub consortium will contribute an additional $11.9 million over the four years in financial and in kind contributions.

The Hub’s resources will be spread throughout southern NSW in a ‘hub-and-spoke’ model which will facilitate drought resilience outcomes in water management, food security, farming systems, agribusiness, community building, regional development and the environment.

“We’re excited to establish a Drought Resilience Adoption and Innovation Hub for southern NSW which will bring together farmers, industry and researchers to work on programs which drive drought resilience,” he said.

“The Hub will facilitate a truly collaborative approach to ensure the technological advances which will reduce the impact of drought in regional Australia are developed and shared.

“As Australia’s largest regional university with a long history of undertaking high quality research in agriculture that has an impact, we are well placed to provide leadership to ensure drought resilience knowledge is available in a way that’s relevant to this region’s climates, farming systems and conditions.”

Minister for Agriculture, Drought and Emergency Management, the Hon David Littleproud was at AgriFutures at Charles Sturt in Wagga Wagga to make the announcement on Monday 12 April.

He said the Southern NSW Hub will be a shopfront for farmers to access innovative technologies that enable to be more prepared and drought resilient.

“The Hub will be a ‘hub and spoke’ model with resources, including staff and programs spread throughout Southern New South Wales to capitalise on the members skills, assets and networks to generate drought resilience outcomes in areas such as water management, food security, farming systems, agribusiness, community building, regional development and environment,” he said.

The Hub will service an area which includes most of the Macquarie River catchment and lower reaches of the Darling River, the Illawarra and South Coast, Riverina, Australian Alps, Western NSW and includes Canberra, Dubbo, Orange and Bathurst and their surrounding regions.

A Charles Sturt University partnership program provides an insight into how the Drought Resilience Adoption and Innovation Hub can benefit primary producers and the agriculture industry.

Charles Sturt was a partner of the EverGraze research program which ran from 2003 to 2014, investigating how livestock enterprises could be best managed for profit and sustainability using perennial pastures.

The on-farm research was conducted, tested and implemented on properties around Wagga Wagga and Holbrook, with researchers examining the consequences of different combinations over varying time periods and identifying practices to reduce risk by making system-based decisions.

Charles Sturt Acting Deputy Vice-Chancellor (Research) Professor Michael Friend was a research leader for EverGraze, and said an important goal of that project - to generate information that was relevant and accessible to farmers – would be mirrored in the research to be undertaken at the Drought Hub.

“EverGraze demonstrated how on-farm research can be implemented to have a direct and positive impacts on primary producers and the environment,” he said.

“In essence the Drought Hub will reproduce that outcome on a mass scale, acting as a conduit for the kinds of research and technologies which the agriculture sector requires to ensure its sustainability.

“This successful bid is an acknowledgement of Charles Sturt University’s long record of impactful agriculture-based research and will have wonderful flow-on benefits for farmers, industry and the regions of southern NSW.”

For more information or to arrange interviews, contact Nicole Barlow at Charles Sturt Media on mobile 0429 217 026 or news@csu.edu.au.