The time has come to farewell one of CSU landmark buildings after it has served generations of students in Wagga Wagga as an accommodation block.

The time has come to farewell one of Charles Sturt University’s (CSU) landmark buildings after it has served generations of students in Wagga Wagga as an accommodation block. 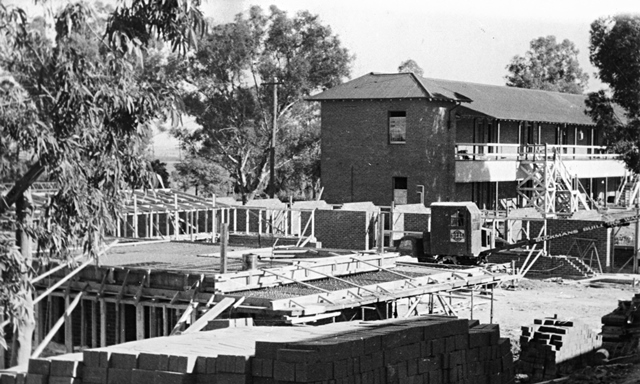 Executive Director of the CSU Division of Facilities Management Mr Stephen Butt said, “Charles Sturt University wants to acknowledge the history of Doman Hall with the launch of the book Doman by Mrs Sherry Morris at a ceremony from 10.30am on Thursday 15 February.”

Mr Doman, along with the College’s House Master Mr Don Joyes, lobbied throughout the 1950s for a new student accommodation block.

Mr Butt said, “A plaque and interpretative signage will be erected on the site of Doman Hall, which along with the book Doman, will ensure the legacy of the building and the important role it played in many people’s lives is remembered.

“Doman Hall has reached the end of its useful life and as a result the University has decided to demolish the building to mitigate risk and undue maintenance costs.”

The site will be landscaped and a nearby carpark expanded.

Relatives of the late Mr Doman will join past and present CSU staff and students, and members of the Wagga Agricultural College Old Boys Union (WACOBU) and the Wagga Wagga and District Historical Society at the book launch and the unveiling of a plaque and interpretative signage from 10.30am on Thursday 15 February at CSU in Wagga Wagga.

The media is invited to attend the launch of Doman, and the unveiling of a plaque and intepretative signage at a morning tea from 10.30am to 11.30am on Thursday 15 February in the foyer of Joyes Hall, building, building 209, near car park 76, CSU in Wagga Wagga.

The Executive Director of the University’s Division of Facilities Management Mr Stephen Butt will be available for interviews after the morning tea at 11.30am. For further information contact CSU Media.

Licensed contractors are currently on site at Doman Hall at CSU in Wagga Wagga to remove hazardous materials under strict and controlled conditions in line with government regulations.

Doman Hall is scheduled to be demolished and the site landscaped before the middle of 2018.

CSU Residence Life offers a range of on campus student accommodation across its campuses.