CSU a national award winner for ‘War on Waste’ project

CSU has come out on top taking home a national Tertiary Access Group (TAG) Award for its ‘War on Waste’ initiative, through the work of CSU Green.

* The TAG awards are highly competitive and include universities from across the nation. 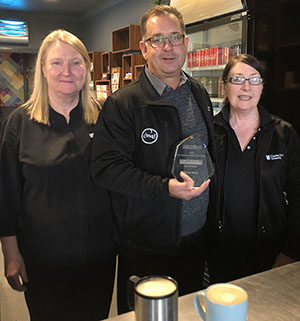 Charles Sturt University (CSU) has come out on top taking home a national Tertiary Access Group (TAG) Award for its ‘War on Waste’ initiative, through the work of CSU Green.

The campaign was instigated primarily for its sustainability benefits and builds on CSU’s status as Australia’s first certified Carbon Neutral University.

The campaign was rolled out across CSU’s nine café outlets on five different campuses; Albury-Wodonga, Bathurst, Dubbo, Orange, and Wagga Wagga. The aim of the campaign was to raise awareness, and included reaching the target of 50per cent of all coffees being sold in a reusable cup and reduce the amount of waste going into landfill.

Director of CSU Residence Life, Mr David Griffin, said “This success is a credit to Charles Sturt University’s students and staff who have the insight to understand how they can positively impact on the environment and have a real commitment to the University’s sustainability objectives”.

The TAG awards include universities all over the country and highlight all aspects of excellence and success in the Australian tertiary student services sector.

Mr Griffin added, “The impact of the Charles Sturt University ‘War on Waste’ campaign has extended beyond the boundaries of its catering outlets and found its way directly into the classrooms, linking into the curriculum”.

The legacy of the CSU ‘War on Waste’ campaign is ongoing, and is creating more sustainable behaviours among CSU students, staff and campus visitors.

* If all of those cups were stacked together they would stand more than three and a half kilometres high.

Contact CSU Media to arrange interviews with Mr David Griffin, War on Waste, at CSU in Wagga Wagga, or Mr Brett Russell at CSU in Bathurst.