CSU has released the 2017 Sustainability Scorecard which details activities and achievements that contribute to CSU cementing its commitment to environmental sustainability and building upon being ‘Australia’s first Carbon Neutral University’.

* ‘Student Sustainability Advisors’ were implemented at four campuses in 2017 Charles Sturt University (CSU) has released the 2017 Sustainability Scorecard which details activities and achievements that contribute to CSU cementing its commitment to environmental sustainability and building upon being ‘Australia’s first Carbon Neutral University’.

“One of the most visible examples was the completion of our 1.77 megawatt solar installation at the University in Wagga Wagga, which remains one of Australia’s largest roof-mounted photovoltaic (PV) systems,” he said. “A first in 2017, ‘Student Sustainability Advisors’ were implemented at four campuses, working at a peer-to-peer level to educate and inspire students in residence to act more sustainably.

“Another highlight was being acknowledged at local, state and national levels to win three awards from business chambers in Wagga Wagga, Port Macquarie and Murray-Riverina.

“CSU was also a finalist in the national Banksia Foundation awards for large business sustainability leadership.”

Mr Maher noted that CSU exceeded its biodiversity target to manage 20 per cent of CSU lands for conservation in 2015, and in March 2017 ratified the 254 hectares in a series of biodiversity zones across seven CSU campuses at Albury-Wodonga, Wagga Wagga, Canberra, Dubbo, Orange, Bathurst, and Port Macquarie.

One hundred hectares of these zones are on CSU farmlands. 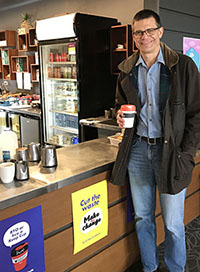 “Charles Sturt University also joined the ‘War on Waste’ campaign by reducing disposable coffee cup use from 667 cups per day across our campuses by 50 percent from our launch on 1 August 2017 through our KeepCup campaign.

“We also engaged staff and students to join the reusable bag movement via on-campus sewing bees, which resulted in usage figures from 50 plastic bags given out with purchases at campus stores daily to 23 bags sold between August and December.

“With 2017 bringing excellent partnerships, strengthened commitment and encouraging goal outcomes, I anticipate that the University’s 2018 sustainability achievements will be inspiring for us all,” Mr Maher said.