Charles Sturt University (CSU) has welcomed a public statement of support from Senator the Hon Fiona Nash, Minister for Rural Health for the establishment of the Murray Darling Medical School. 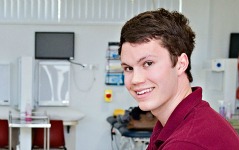 Charles Sturt University (CSU) has welcomed a public statement of support from Senator the Hon Fiona Nash, Minister for Rural Health for the establishment of the Murray Darling Medical School.

Senator Nash backed the establishment of the multi-campus regional medical school at the launch of the Beyond the Range website, which aims to promote the opportunities available to health professionals in New South Wales (NSW).

Interviewed on ABC Radio Central West prior to the launch Senator Nash said, "It's not just about attracting doctors from the cities, it's about also building our homegrown workforce… We know if they're from rural origin, they're far more likely to stay in rural and regional areas.

"All credit to Charles Sturt University, they've done a great job – the University – around [veterinary and dental science]. And I know they've got the Murray Darling Medical School proposal up, which I support."

The Murray Darling Medical School initiative is a partnership between CSU and La Trobe University to address rural doctor shortages in New South Wales (NSW) and Victoria through the establishment of a new medical school based at the Orange, Wagga Wagga and Bendigo campuses.

Mr Mark Burdack, Executive Director of the Murray Darling Medical School initiative said, "Senator Nash is a great champion of investing in rural and regional health. She played an integral role along with her Coalition colleagues in delivering Charles Sturt University's rural dental program in Orange and Wagga Wagga, and its rural veterinary program.

"By comparison, the latest available data suggests that as few as eight per cent of Australian medical graduates from typical metropolitan medical schools choose to work in rural areas after completing their training," he said.

"Rural communities have consistently shown that if you are genuine about getting solutions to rural workforce shortages, you need to invest in the innovative capacity of rural and regional people.

"We have received overwhelming support from people across rural and regional Australia for a new local medical school that will finally give rural students a chance to study medicine locally, and which will deliver more doctors for the bush.

"We welcome the commitment of the National Party to deliver the Murray Darling Medical School in government, and the support that has been extended by our local members across rural NSW and Victoria, and by the Minister for Rural Health, for the delivery of this critical piece of rural health infrastructure," Mr Burdack said.