Following the death of Mr Tom Uren, AC, on Monday 26 January, the nation reflected on his contribution as a parliamentarian, patriot and a truly distinguished Australian. 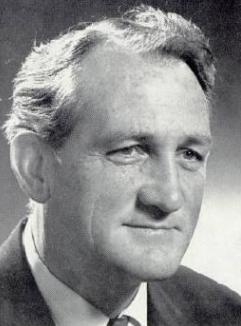 Following the death of Mr Tom Uren, AC, on Monday 26 January, the nation reflected on his contribution as a parliamentarian, patriot and a truly distinguished Australian.

"The nation lost an outstanding political and social leader this week, and the University extends its condolences to Mr Uren's family, friends and colleagues.

"The University bestowed an honorary doctorate on Mr Uren in 1997 in recognition of his distinguished contribution to the vigour of Australian democracy and the practice of parliamentary government in Australia," Professor Vann said.

"Mr Uren spent much of his life as a 'constructive oppositionist', and exemplified the qualities of service to the community and the nation that not only endure but, one hopes, will prevail.

"His shared vision for the development of the Albury-Wodonga region, and the establishment of a university there, is particularly evidenced by the presence of Charles Sturt University there today. In that, we can proudly note the manifest alignment of Mr Uren's social ambitions and the exhortation of colonial explorer Charles Sturt - 'for the public good' - which steers this University.

During World War II Mr Uren served in the Second Australian Infantry Forces, was captured and forced to labour on the infamous Burma-Thailand Railway. There his courage, stamina and calmness under severe provocation were an inspiration to his fellow Australian prisoners. This experience shaped his subsequent post-war service philosophy and actions.

Mr Uren was a member the Australian Labor Party, and held a seat in the Australian Parliament for 32 years, and served in two ministries. In the Whitlam Government he was Minister for Urban and Regional Development for the years 1972 to 1975, and undertook a range of other parliamentary appointments and offices. He established the Australian Heritage Commission and the National Estate Program. But besides having a sense of place in history, Mr Uren also had a sense of place in the future. On 20 November 1973 he introduced legislation to establish the Albury-Wodonga Development Corporation, a statutory body comprising representatives of Federal, State and Local governments. Its charter was to promote the growth of the region.

Adjunct Associate Professor Bruce Pennay from the CSU School of Environmental Sciences and the Institute for Land, Water and Society in Albury-Wodonga acknowledges Mr Uren was an originator of the notion of developing Albury-Wodonga as a National Growth Centre in 1973.

"As the first Minister for Urban and Regional Development, Mr Uren had ministerial responsibility for undertaking the growth centre project which was novel, experimental and imaginative," Professor Pennay said.

"Mr Uren was a vigorous champion of the idea of creating a new regional city which would not have the problems of the overcrowded and under-planned Sydney and Melbourne. His enthusiasm came from what he and his family saw as the inconveniences of living in the urban sprawl of Western Sydney," Professor Pennay said.

"Mr Uren went on to become a staunch defender of the project when it fell into disfavour with the ensuing government. After the Labor Party resumed government, Mr Uren became Minister for Local Government and Administrative Services in 1984. He once again had responsibility for what he regarded as his favourite project. Subsequently, Albury-Wodonga was selected to be the base for a large branch of the Australian Tax Office."

Mr Uren opposed the wars in Vietnam, Iraq and Afghanistan, and was prepared to spend time in gaol in support of causes that he thought were right.