CSU has again been recognised for its commitment to reducing its environmental footprint, winning a prestigious Green Gown Award, presented by the Australasian Campuses Towards Sustainability.

Charles Sturt University (CSU) has again been recognised for its commitment to reducing its environmental footprint, winning a prestigious Green Gown Award, presented by the Australasian Campuses Towards Sustainability (ACTS).
The Green Gown Awards recognise excellence in sustainability within the tertiary education sector in Australia and New Zealand. 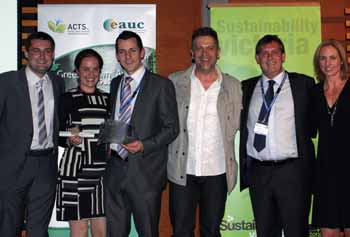 During a ceremony in Adelaide on Thursday 29 September, CSU was named the winner of the 2011 Award for Excellence for responsible stewardship of resources through initiatives to reduce both energy and water consumption and greenhouse gas emissions.
CSU Vice-Chancellor and President, Professor Ian Goulter, said “Charles Sturt University is proud to receive this award, acknowledging the efforts of the staff, not just moving our organisation towards a more sustainable footing but acting as a model of sustainable living for rural and regional Australia”.
CSU has set targets to be carbon neutral by 2015, to cut energy use by 25 per cent by 2015, to have 20 per cent of University land used to increase biodiversity by 2015 and to reduce solid waste by 70 percent by 2014.
The University has invested $740 000 in water and energy saving initiatives and has an annual $100 000 Sustainability Grants Program for staff and student initiated projects.
In 2010, CSU achieved a 47 per cent reduction in water use, compared with the 2006 baseline data, and a 34 per cent improvement in fuel efficiency of the vehicle fleet since 2006.
CSU was nominated for the Award for Excellence by another institution and was voted as the winner by other members of ACTS.
CSU Director of Operational Services, Mr Wayne Millar said it’s good to be recognised by peers.
“This Award shows that our projects and actions towards sustainability are genuinely appealing, and supported by the wider community,” he said. “We're not just implementing more efficient systems that are reducing our footprint, we're also engaging people, and creating an environment that is consistent with the culture and awareness that we desire our graduates to possess.”
This is the second year CSU has picked up a Green Gown Award.  In 2010 the University won the category of ‘Continuous Improvement - Institutional Change’ for its overall commitment to environmental, economic and social sustainability, even during times of drought, bushfire and climate change.