Blue-green algal bloom under the spotlight 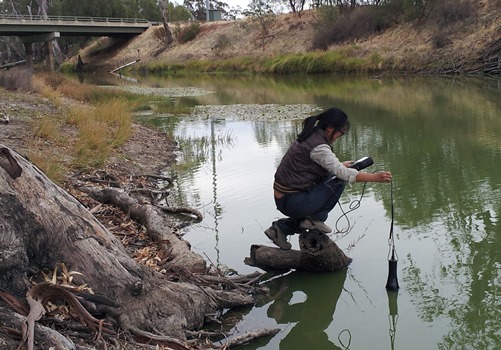 The management of blue-green algal blooms is a responsibility of state government agencies and local waterway managers. In the Murray catchment, joint government arrangements exist, overseen by the Murray Regional Algal Coordinating Committee.

The scale of this bloom, including the bloom's impacts on sources of additional environmental water upstream, have limited the potential use of additional water to mitigate impacts on aquatic systems downstream. However, the extra monitoring allows a greater understanding of options that may arise depending upon how the bloom breaks down.

In addition to their usual field work, the CSU team has been taking weekly water samples from 14 sites in Yallakool and Colligen Creeks, and the Niemur and Wakool Rivers since the beginning of March.

Professor Watts said, "My team is monitoring the extent of the bloom in the smaller waterways of the Edward-Wakool system and other agencies are monitoring the Edward River at Moulmein and Deniliquin as well as sites in the Murray River."

Team member and environmental chemist Dr Julia Howitt is analysing the effect of the bloom on the carbon signature of the water.

Dr Howitt said, "We are also collecting additional information on flows, nutrients and other water quality parameters so we can learn more about the factors that influence the onset and breakup of the bloom."

Professor Watts said "The organisms commonly referred to as blue-green algae are actually cyanobacteria that can produce toxins that affect the liver, nerves and skin. The cyanobacteria that is dominating this bloom has been reported in other parts of the world, particularly around the Mediterranean Sea, and is usually associated with water temperatures above 26°C.

"The water temperature at some sites in the Edward-Wakool system was very high, between 28 and 30°C, in early March and this created conditions favoured by the cyanobacteria.

"The algal bloom has started to break down and this may be due to the recent cooler weather."

Professor Robyn Watts is in the School of Environmental Sciences at CSU in Albury-Wodonga.