Senior ecologists at CSU believe the majority of irrigators in southern Australia are doing the right thing and are not pumping excessive water from the southern Murray Darling Basin. But they also believe there is room for improvement. 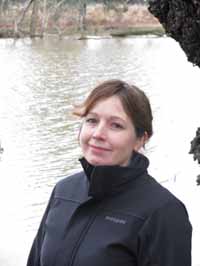 Senior ecologists at Charles Sturt University (CSU) believe the majority of irrigators in southern Australia are doing the right thing and are not pumping excessive water from the southern Murray Darling Basin.

But they also believe there is room for improvement.

Ecologist Dr Skye Wassens (pictured), and inland fish expert Dr Lee Baumgartner and other CSU researchers have worked along the Murray and Murrumbidgee rivers for the past 15 years.

They believe the majority of irrigators, sheep and cattle graziers and other community members in the Murray Darling Basin want to see improvements in their local river ecosystems, despite the actions of a few irrigators outlined in recent media reports.

These reports noted the provision and importance of environmental water to maintain or repair river ecosystems that was agreed to by federal and state governments in the Murray Darling Basin Plan.

"Many people, including irrigators and graziers, give a lot of time to contribute to decision making about environmental water," said Dr Wassens, a senior researcher with CSU's Institute for Land, Water and Society.

"They work cooperatively as partners with Commonwealth, state and local agencies, and with scientists such as ourselves who are monitoring the responses of the river ecosystem to the environmental flows.

"Water is essential for cropping, livestock and domestic needs. Securing more water for the Basin's rivers is also vital for the recovery of its ecosystems."

Dr Baumgartner said, "However, extracting excessive volumes of water will inevitably destroy the fish and other aquatic animals that live in the rivers and native trees and plants that rely on this water.

"Many irrigators are motivated to do more to avoid damage to fish populations in streams that are pumped for irrigation water.

"Pumping thousands of gigalitres of water each year extracts thousands of fish with the water. These fish are lost from river populations and cannot return, as they end up in storage dams or pumped directly onto crops.

"It has been estimated that there are millions of fish extracted each year; many more than are annually re-stocked in the entire Murray Darling Basin."

The senior fish researcher believes these losses can be totally cut by installing well-designed fish exclusion screens around pump intakes and at river diversions.

"Not only can these screens prevent the loss of fish, but in many cases they clean themselves and help increase water flows into the pump intakes," Dr Baumgartner said.

"Other countries are installing fish screens as best practice and many Basin irrigators are considering various off-the-shelf solutions that could reduce fish entrainment by over 90 per cent.

"These screens would have enormous ecological benefits if they were included as part of the toolkit of measures in the Basin Plan.

"We want to work in partnership with the irrigation industry to show how incorporating screening as part of a best-practice, whole-of-farm approach to modern irrigation can also improve ecological outcomes, increase the efficiency of water delivery and increase profits in agriculture."

For interviews with Dr Skye Wassens and Dr Lee Baumgartner, who are usually based at CSU in Albury-Wodonga, contact CSU Media.

Dr Baumgartner recently collaborated with ILWS director Professor Max Finlayson to provide a comment on the state of Murray Darling Basin Plan in The Conversation.

See more about CSU's research in monitoring the value of environmental water in the southern Basin here: