To the delight of researchers, the inaugural Slopes to Summit (S2S) Big Tree Competition has uncovered trees larger than any previously documented in the region along with some fascinating stories.

To the delight of researchers, the inaugural Slopes to Summit (S2S) Big Tree Competition has uncovered trees larger than any previously documented in the region along with some fascinating stories. 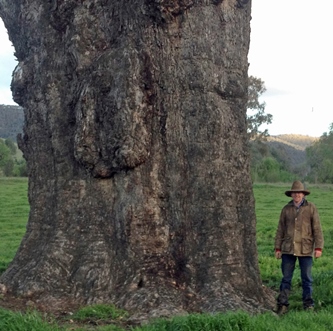 And while this year's competition has drawn to a close, the information gained will be put to good use by Charles Sturt University (CSU) researchers.

Sponsored by CSU's Institute for Land, Water and Society (ILWS), the NSW Government's Environmental Trust and the Great Eastern Ranges Initiative, the competition was held from February to April to raise awareness of the importance of conservation of large trees in rural landscapes. Winners will be named online on Wednesday 6 May.

ILWS researcher Dr Peter Spooner said, "Our knowledge about the size and general location of the large old trees across the landscape is poor.

"Some of the trees highlighted in this competition have dimensions previously never recorded, where several had a girth of greater than nine metres," he said.

"Previous research has looked at the size of trees and correlated that to age, which suggests that many of the entrants have recorded trees that are many hundreds of years old.

"Large trees are like an apartment block providing habitat for many other birds, animals and other plants. So knowledge about their size and whereabouts is important to the conservation of species in our endangered woodlands."

Dr Spooner said a positive outcome of the competition is the interest generated amongst farmers and the wider community.

"Entrants had to write why the tree was important to them and this information will be used in social science research to examine people's connections to nature," he said.

The competition's photo and video entries can be found here.

Entrants in the Slopes to Summit Big Tree Competition were asked to submit photos or videos of trees in five categories including Big Native Tree; Big School Tree; Big Park Tree (e.g. National Park, Travelling Stock Reserve); Big Paddock Tree; and Big Town or City Tree. The trees had to be located in southern NSW in the Slopes to Summit (S2S) project area, from Mount Kosciuszko to Corowa, and south of Henty, Holbrook, and Tumbarumba. The winners will be announced on Wednesday 6 May. Further details are available from S2S facilitator Mr Sam Niedra on 0448 806 256.

Dr Peter Spooner is a researcher with ILWS and a senior lecturer in ecology at CSU in Albury-Wodonga. He is available for interview. Contact CSU Media.