CSU and La Trobe University have welcomed the appointment of Professor John Dwyer, AO, as Foundation Professor of Medicine and Surgery at the planned Murray Darling Medical School. 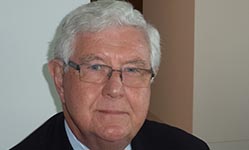 "He was with us from the very first day we proposed the establishment of a new medical school for the Murray Darling Basin, and he continues to be one of its most ardent supporters.

"For more than two decades he was head of UNSW's School of Medicine at Sydney's Prince of Wales Hospital. He has had much experience in curriculum development. John will bring enormous experience in helping us set up the Murray Darling Medical School if final approval is granted by the Federal Government."

"He is an expert in medical education, and was heavily involved in the development of the UNSW rural clinical program in Wagga. He has been at the forefront of innovation in medical education to improve its ability to meet the needs of vulnerable communities.

"His appointment reflects the confidence of our universities that the Murray Darling Medical School will soon be a reality." 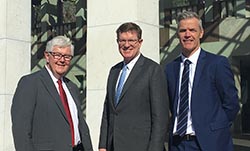 National Farmers' Federation, Chief Executive Mr Tony Mahar (centre) said the MDMS would be welcomed by the rural sector including those in the Murray Darling community.

"Educating and training students who have grown up in the Murray Darling to be the region's doctors of the future can only benefit our communities. We support vibrant growing and healthy rural and regional communities, the objective of getting more doctors in these communities just makes sense.

"They know the health problems in our farming communities, they have seen them firsthand.

"It is also fitting that leading universities, such as Charles Sturt and La Trobe which are so closely embedded in our communities, are seeking to address the doctor shortage in our regions.

"We look forward to support from the Federal Government to make this school happen."

Professor Dwyer, who is Emeritus Professor of Medicine at the University of New South Wales and Founder of the Australian Health Care Reform Alliance, said: "We have not fixed rural doctor shortages over the past 20 years by sending rural kids to the city to study medicine. There is no reason to believe that continuing to do the same thing for the next 20 years is going to deliver a different outcome.

"It is nonsense to suggest that sending rural kids to the city to study medicine isn't having a negative impact on their desire to work in rural practice. The evidence speaks for itself. In one study, over 55 per cent of rural kids wanted to work rurally when they started at a city medical school, but that declined to fewer than 10 per cent by the end of their study.

"We can't fix the problem if we don't acknowledge what the evidence is telling us.

"The evidence says if you deliver undergraduate and postgraduate medical education and training in rural areas, then more graduates will work rurally.

"It's not rocket science. We need to get more rural and Indigenous kids studying medicine in the regions, as well as grow the number of regional training places available for these kids when they graduate. Doing one, but not the other, is simply a waste of time.

"The Murray Darling Medical School addresses both ends of the training pipeline in a novel and proven way.

"The School understands the importance of the package; rural medical schooling followed by a rural internship and rural vocational training – delivering all three in our regions will deliver three to five times more doctors for our regional and rural communities than the current piecemeal approach.

"I am thrilled to take up this role, and to work with the universities to secure final approval for the School from the Government and to assist with setting up the program."