Charles Sturt University and La Trobe University have welcomed the Federal National Party's commitment to create a $1 billion National Stronger Regions Fund and say it could be another important step towards creation of the Murray-Darling Medical School based in Orange, Bendigo and Wagga Wagga.

Charles Sturt University and La Trobe University have welcomed the Federal National Party’s commitment to create a $1 billion National Stronger Regions Fund and say it could be another important step towards creation of the Murray-Darling Medical School (MDMS) based in Orange, Bendigo and Wagga Wagga.
Federal Nationals Leader Warren Truss announced yesterday the regional fund would be created if the Coalition formed government after the September federal election.
The National Party’s policy platform ‘Our Plan for Regional Australia’ already says this in relation to the MDMS:
“In government we will support this initiative, aimed at providing 120 places per year initially, increasing to 180 places in following years, as well as providing teaching infrastructure in hospitals, general practices and community health clinics across the region.”
Federal Opposition Leader Tony Abbott has also indicated the Coalition's support for increased intern training places in rural and regional areas.
Both universities are working together to create the  new type of medical school - designed specifically to train doctors who will live and work in rural and regional Australia. 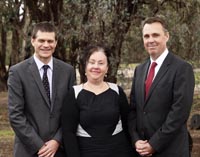 Charles Sturt Vice-Chancellor Professor Andrew Vann said he looked forward to continuing discussions with the political parties and being a part of the solution to the continuing shortage of doctors in rural and regional areas.
“We are pleased to see the National Party commit to both the National Stronger Regions Fund and to establishing the Murray Darling Medical School if elected to government,” said Professor Vann.
“We have the policy commitment from the National Party to create the Murray Darling Medical School and as of today, we have a potential funding source for the initiative.
“There could be no better funding candidate for the National Stronger Regions Fund than the Murray Darling Medical School, which will take people who have strong connections to rural and regional areas and then train them to be doctors who would live and work outside our capital cities,” he said.
La Trobe University Vice-Chancellor Professor John Dewar also commended the announcement.
“Rural doctor shortages are well-known to people living in rural and regional Australia. The current model of medical education sees students studying predominantly in capital cities and in large metropolitan hospitals. They don’t end up working outside the capital cities and clearly this does not address the ongoing shortage of rural doctors,” Professor Dewar said.
“The MDMS is crucial in ensuring a secure source of medical graduates for rural communities who have had to rely far too long on recruiting doctors from overseas.
“Regional universities like Charles Sturt University and our Bendigo campus are achieving rural enrolment rates well above 70 per cent. More than 75 per cent of these rural health graduates are retained in rural employment after graduation.
“Regional universities are creating an effective workforce pipeline enabling rural people to train in rural areas and then continue to live and work in regional communities,” he said.
See the MDMS website for more information.
The Murray Darling Medical School in summary: