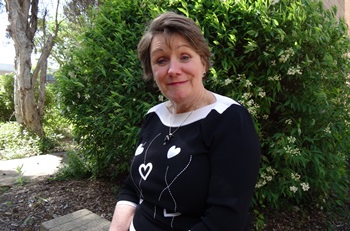 Charles Sturt University (CSU) Professor of Rural Health Linda Shields contributes to the Australian genocide discussion with the publication of Genocide Perspectives V: A Global Crime, Australian Voices. It is released by the Australian Institute of Holocaust and Genocide Studies.

CSU Faculty of Science researcher Professor Shields (pictured) said the book, which she contributed a chapter to, examines genocide events over Australia's history and the way Australians gloss over or pretend they didn't happen.

"Professor Colin Tatz, one of the authors and Australia's leader in genocide studies, raises the issues of European colonisation in Australia and its impact on Indigenous Australians," Professor Shields said.

"European colonisation led to genocide, but it's something Australians don't recognise as it doesn't fit into our 'lucky country' ideal."

Tying into this discussion in the book is Professor Shields' chapter titled From Marriage Laws to the 'Final Solution': The Roles of Health Care Personnel. In the chapter, Professor Shields explains how health professionals have played a part in genocide.

"Throughout recent Australian history, nurses were part of genocide events such as the Stolen Generation," Professor Shields said.

Professor Shields, who is also a board member of the Australian Institute of Holocaust and Genocide Studies, said Australian scholars made an important contribution to the field of genocide and Holocaust studies.

The book launch will be at 6pm on Thursday 19 October 2017 at the Sydney Jewish Museum in Darlinghurst, Sydney, NSW. Guest speakers will include Mr Geoffrey Robertson, QC, and Mr Mark Tedeschi, QC, and will be followed by a panel discussion on Australia's history of genocide.

The book and evening honour Professor Colin Tatz, AO. Further information about the event can be found on the Sydney Jewish Museum website.

Contact CSU Media to arrange interviews with Professor of Rural Health Linda Shields in the CSU Faculty of Science.