Impacts of drought, fires and flood on rivers 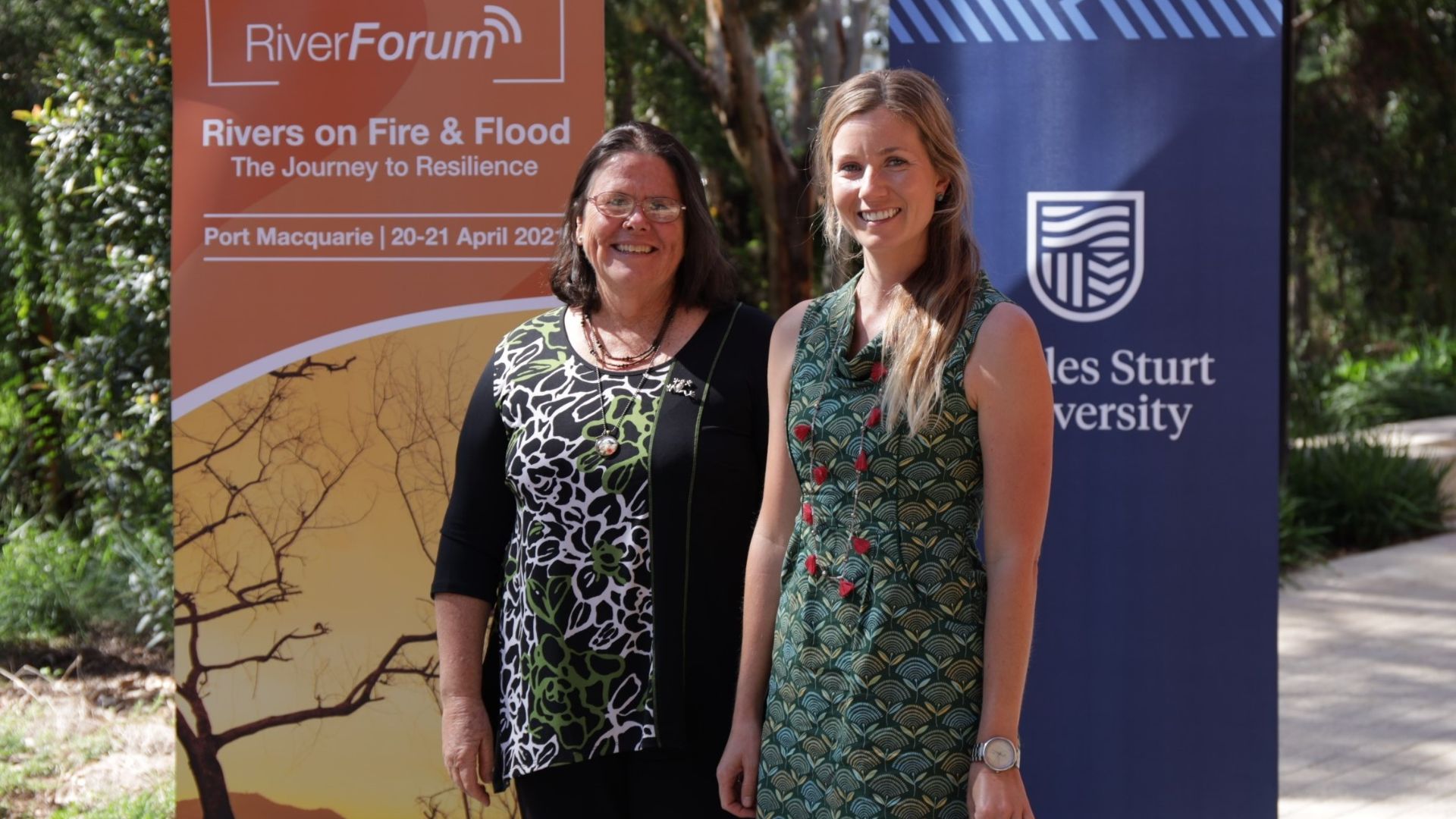 Two environmental scientists at Charles Sturt University drew on their research and personal experience of bushfires and floods when they spoke at a major environmental conference in Port Macquarie this week.

Two environmental scientists at Charles Sturt University drew on their research and personal experience of bushfires and floods when they spoke at a major environmental conference in Port Macquarie this week.

Dr Alexandra Knight (pictured left) and Dr Jessica Tout-Lyon (pictured right) delivered their keynote address ‘From the Mountains to the Sea – through drought, fire and flood on the Mid North Coast of NSW, Australia’ at the ‘Rivers on Fire and Flood – A Journey to Resilience Conference’ at the University on Tuesday 20 April.

Both scientists are members of Charles Sturt University’s Institute for Land, Water and Society (ILWS) in Port Macquarie.

They reflected on their previous research and their recent lived experience of consecutive disasters to examine the complex interactions of multiple disturbances on local river systems.

“Rivers connect us, connect culture, connect the landscape, and connect biota,” they told the conference. “Rivers connect disasters, and they can connect recovery efforts.

“In March 2021 we lived through a disastrous one-in-100 year flood event when up to 75 per cent of the region’s median annual rainfall fell in seven days on the Mid North Coast of NSW.

“We observed and experienced devastation to our communities, and to the ecological processes and functions that support us.”

The scientists described how in the previous 18 months the most widespread, driest and warmest drought on record in the region culminated in a five-month-long bushfire that spread on an unprecedented scale, engulfing south-eastern Australia, including its rivers.

“Relief arrived in the form of rain, resulting in two smaller floods which transported ash, sediment and debris into rivers, some of which flowed for the first time in years,” they said.

“The flood events were quickly followed by large-scale fish kills and closure of oyster farms.

“The consecutive nature of these severe events within a short time period heightened our understanding of what it means to live in a changing climate.

“In south-eastern Australia, a hotspot for climate change, the severity and frequency of extreme weather events and associated bushfires are only forecast to increase.”

They stressed that combined with the effects of a 71-fold increase in Australian human population within just 200 years, and with 85 per cent of that population located on Australia’s coast, the impacts on availability and quality of water and on those river systems running from the mountains to the sea will continue to be severe.

“Some of these impacts have been obvious, such as the flooding of houses, and large-scale fish deaths, while other responses are hidden, remaining largely unobserved and unmeasured,” they said.

The scientists described the recent natural disaster events that have occurred in the Macleay Catchment on Thungutti and Dunghutti Country and in the Hastings Catchment on Birpai Country of the Mid North Coast of NSW.

They made recommendations that aim to improve socio-ecological responses and recovery.

“Our recommendations revolve around better communication and sharing of knowledge,” they said.

“We need to listen to and work alongside First Nations Australian Elders to better understand our Country to move forward together.

“We need to make sure that the knowledge and understanding that we have already is shared across local and state government boundaries.

“And we need to make informed planning decisions, where local communities gain understanding of the risks they are currently facing as a result of the current changing environmental conditions and climate.”

To arrange interviews with Dr Alexandra Knight and Dr Jessica Tout-Lyons contact Bruce Andrews at Charles Sturt Media on mobile 0418 669 362 or via news@csu.edu.au