Business excellence and leadership in the Aboriginal and Torres Strait Islander community will be celebrated throughout October during the second annual Indigenous Business Month.

Business excellence and leadership in the Aboriginal and Torres Strait Islander community will be celebrated throughout October during the second annual Indigenous Business Month. 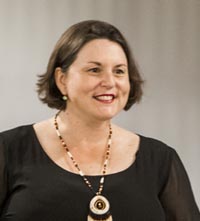 "Indigenous entrepreneurs, both individually and as a group, provide acts of leadership every day, from working with clients, communities and consumers, to creating new market opportunities and income streams," said Ms Michelle Evans, Associate Professor of Leadership at Charles Sturt University (CSU) and Director of the MURRA Program which educates and promotes Indigenous business leaders and entrepreneurs.

The theme of Indigenous Business Month in 2016 is 'Celebrating Leadership'.

"During October, we celebrate all forms of leadership across the diverse Indigenous business sector in Australia," Professor Evans said.

Research in 2009 by the Australian Human Rights Commission found that raising Indigenous life expectancy, employment and income levels to those of the wider community would increase Australia's real GDP by one per cent, or $10 billion.

"Since this increase in GDP would be larger than the forecasted increase in the country's total population, this would raise national living standards for all Australians. Thus, Indigenous economic development can affect Indigenous communities as well as the wider Australian economy," Professor Evans said.

As government and corporate Australia moves towards a target of procuring three per cent of goods and services from Indigenous businesses, "Programs such as MURRA, Indigenous Women in Business and Indigenous Business Month play a significant role in building a thriving Indigenous business sector," the professor said.

"The inaugural Indigenous Business Month in 2015 was widely supported throughout the Indigenous and non-Indigenous business sector. In 2016, the initiative seeks to maintain that momentum to make Indigenous business growth a part of the national conversation," said Ms Mayrah Sonter, MURRA Program co-founder and director of the Aboriginal media, communications and events agency 33 Creative.

"We are looking forward to robust discussion, sharing of ideas, and acknowledgment of important and inspiring achievements being made across the Indigenous business sector."

For media enquiries and interviews, contact Mayrah Sonter at 33 Creative on (02) 9516 3466, or Wes Ward at CSU Media on 0417 125 795, particularly for Associate Professor Michelle Evans who is based at CSU in Albury-Wodonga.For more information on Indigenous Business Month visit the