Although regarded as destructive pests that kill trees and devalue habitats, the parasitic mistletoe has been found to have another side by CSU researchers. 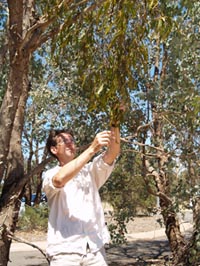 Although regarded as destructive pests that kill trees and devalue habitats, the parasitic mistletoe has been found to have another side by researchers from Charles Sturt University (CSU).
A large-scale experiment in southern Australia, published in the latest edition of the prestigious Proceedings of the Royal Society B [Biological Sciences] journal, highlights the importance of these plants to ecological health.
The paper, “Mistletoe as a keystone resource –an experimental test”, by Associate Professor David Watson, a leading researcher with the University’s Institute for Land, Water and Society (ILWS), and fellow Institute member Mr Matthew Herring, shows that the ubiquitous mistletoes were ecological keystones in southern Australian woodlands.
“Our large-scale experiment showed woodlands lose more than a third of their resident woodland birds after mistletoe plants were removed,” Professor Watson said. Sites where the mistletoe was left alone gained 10 per cent in bird populations.
“As well as food and shelter, we also found mistletoes affected the foundation of woodland food-webs, with highly enriched litter increasing the variability of forest floor nutrients, promoting coexistence and boosting biodiversity.”
The paper summarised the findings from a five year experiment from 2003 to 2008, funded by the Australian Research Council. Mistletoe (family Loranthaceae) was removed from 17 sites on private properties with an additional 11 control sites and 12 sites in which mistletoe was naturally absent, near Holbrook in the southern Riverina. The sites ranged in size from five to 25 hectares..
“This is the first time you can really say with any degree of certainty what effect this plant has on its surrounding community,” Professor Watson said.
“By removing plants from discreet woodlands, we were able to get a really clear window into causation, which is something ecologists rarely do. In this case we can talk about causes and direct effects because we did this manipulation.”
“According to the paper’s referees, this is the most rigorous test of a keystone ever undertaken.”
Professor Watson explained that the influence of a keystone - a term first applied to particular species in the environment but now broadened to include environmental resources - was much greater than expected given the abundance of the keystone.
“One of the best ways to demonstrate whether or not something was a keystone was with removal experiments. However few ecologists have done them as they are just too hard,” he said.
“This mistletoe study will be a text book example of how to do this kind of study and of the kinds of clear-cut patterns you get from doing it. It is a good example of large scale experimental ecology in natural systems, something which is hard to do, risky, takes time to do and generally doesn’t work out the way you planned.
“However mistletoe is a relatively minor component of a woodland system and it is possible to remove them without damaging the trees or system,” he said.
When Professor Watson first suggested mistletoe was a keystone, he was convinced because of two things – “a lot of things eat it and lots of things nest in it. Of all the predictions I tested in this study, neither of those two were supported that strongly.
“I think mistletoe’s influence is far more subtle and has to do with the way nutrients are recycled in woodlands through leaf litter, through reallocating a lot of nutrients in the tree and making them available to many other woodland plants and animals. It works like a fertiliser and has a positive effect on woodland.”