Truth and reconciliation for Solomon Islands

A leading Australian theologian and a South African bishop famous for his anti-apartheid advocacy will travel to the Solomon Islands on Tuesday 28 April to jointly speak about truth and reconciliation processes for the troubled Pacific nation. 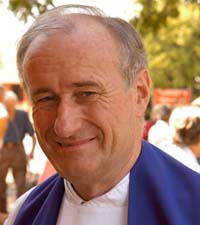 A leading Australian theologian and a South African bishop famous for his anti-apartheid advocacy will travel to the Solomon Islands on Tuesday 28 April to jointly speak about truth and reconciliation processes for the troubled Pacific nation.
Reverend Professor James Haire, AM, who is Professor of Theology at CSU, Executive Director of the Australian Centre for Christianity and Culture, and Director of the Public and Contextual Theology Research Centre at Charles Sturt University in Canberra, will draw on his extensive international and inter-faith experience when he joins Archbishop Emeritus Desmond Tutu to assist Solomon Islanders to heal the rift in their strife-torn nation.
The Solomon Islands have experienced protracted civil unrest since 1998 until an Australia-led multi-national force – the Regional Assistance Mission to the Solomon Islands (RAMSI) - intervened in June 2003 to re-establish order.
Reverend Professor Haire and Archbishop Tutu have been invited by the Initiatives of Change organisation, on behalf of the Solomon Islands government, to speak about their respective experiences of ‘truth and reconciliation’ processes. While Archbishop Tutu was central to the post-apartheid Truth and Reconciliation Commission in South Africa, Reverend Professor Haire, who spent 13 years in the Indonesian archipelago, played a leading role in the ‘Peace Negotiation Settlement’ in Ambon, capital of the Molucca Islands in eastern Indonesia, following bitter violence between Christian and Muslim communities in the region from 1999 to 2003.
“This is an important initiative for the Solomon Islands and I am hopeful that it will help to promote peace and prosperity for its people,” Reverend Professor Haire said.
“I’m also optimistic that my participation and contribution on this occasion may be just one of many instances where Charles Sturt University is able to assist this developing nation.”
Reverend Professor James Haire and Archbishop Tutu have previously met on several occasions, including at the meeting of the World Council of Churches in Santiago de Compostela in Spain in 1993, and at the Assembly of the World Council of Churches in Porto Alegre in Brazil in 2006. They depart from Brisbane on Tuesday 28 April for the three-day meeting in Honiara, capital of the Solomon Islands.