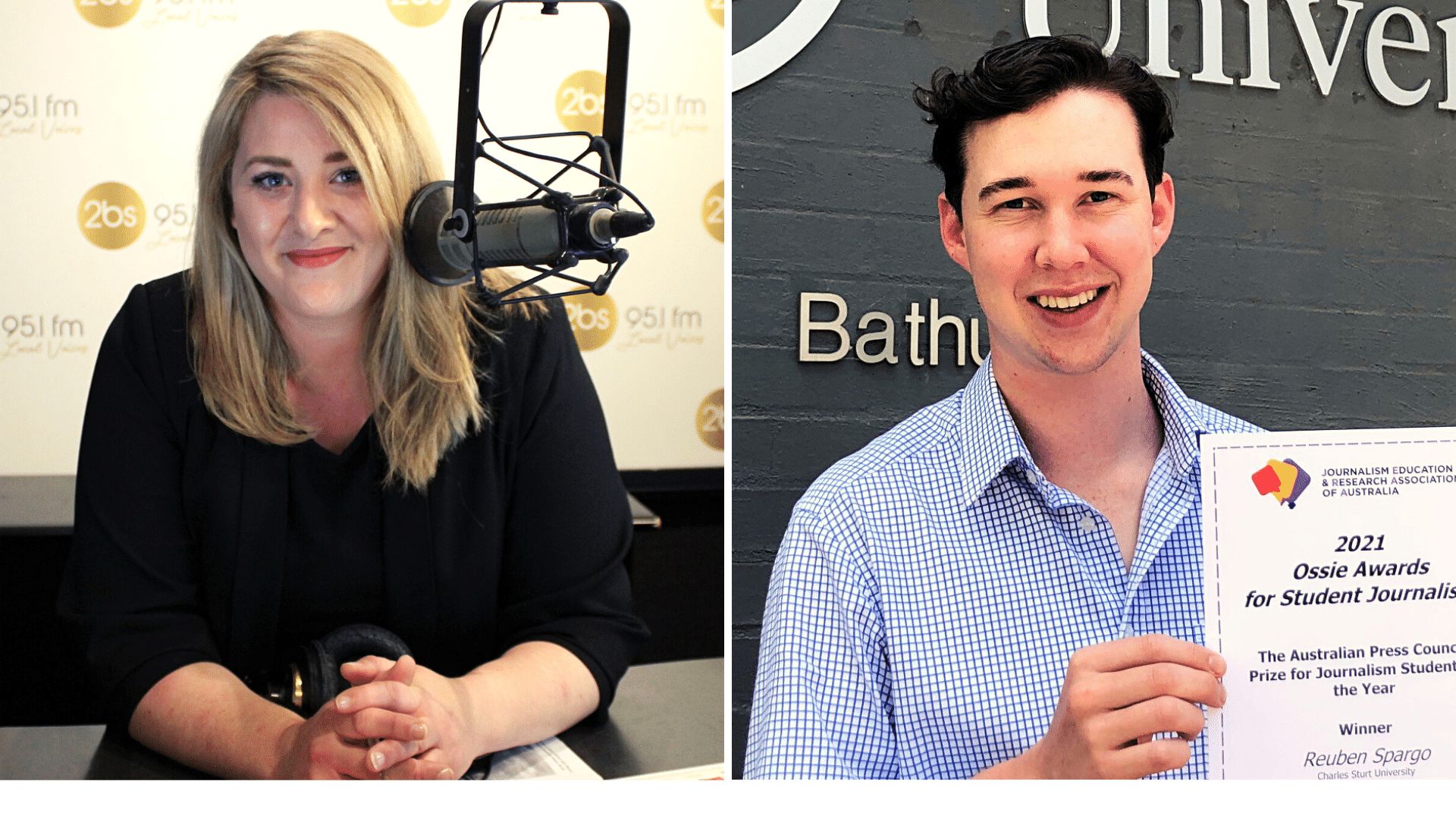 A Charles Sturt University 2021 journalism graduate has won a prestigious award and a current journalism student has won another industry body accolade.

A Charles Sturt University 2021 journalism graduate has won a prestigious award and a current journalism student has won another industry body accolade.

At the Journalism Education and Research Association of Australia (JERAA) annual Ossie Awards recent journalism graduate Mr Reuben Spargo (pictured right) won ‘Australian Press Council Prize for Journalism Student of the Year’ category. He was Highly Commended in the ‘Best Video Story by an Undergraduate or Postgraduate – Over Two Minutes’ category, for his production Outback Youth.

JERAA runs the annual Ossie Awards for all journalism students nationally and announced winners at its recent conference. The Journalism Student of the Year is sponsored by the Australian Press Council, is very competitive, and includes $750 in prize money. He won $200 for the highly commended video.

Senior Lecturer in news and media in the Charles Sturt School of Information and Communication Studies Mr Jock Cheetham said, “This is indeed fantastic news, and I punched the air a few times when they announced the big one, which is the student journalism equivalent of a Gold Walkley award.

“Reuben is obviously one of our best students, has just completed third year, and already has his first full-time industry job some months ago.

“It’s a testament to Reuben’s hard work and our practical course, with its many opportunities for storytelling and journalism published and broadcast across multiple platforms, including and especially via student journalism subject bulletins on radio 2MCE and 2MCE.org, as well as various social platforms including YouTube, Facebook, etc.

“And Reuben is certainly one to keep an eye on as he transitions from student to ‘Mitchell Mafia’ (the colloquial term for Charles Sturt journalism alumni).”

The ACRAs are peer judged and attract entries from all over Australia, with winners selected from a shortlist.

Ms Underwood said she was very honoured to receive the Brian White Award.

“Radio is a fast-paced and exciting medium to work in, and the experience I have received while at Bathurst Broadcasters has provided me with practical skills that can be applied across the industry,” she said.

“It is thanks to the leadership and guidance of General Manager Ms Janeen Hosemans and the support of the entire team that this was possible.”

Ms Underwood said Charles Sturt’s radio and journalism cross-specialty course is what attracted her to Bathurst and the course is unique in that community radio 2MCE is located on campus.

“It is an attractive and proactive way to give students interested in the medium hands-on experience, and broadcasting on 2MCE was an important pathway for me to gain employment at Bathurst Broadcasters,” she said.

“This industry award is very special as it is a memorial award to Brian White who pioneered the news/talk format on Sydney radio station 2GB, which became the template for a succession of presenters.

“I thoroughly enjoy my work and it’s wonderful to be recognised on a national level in this way.”

“Watching students develop is a wonderful part of my job, and I also congratulate Jaclyn for her outstanding award,” Mr Cheetham said. “This is further testament to the outstanding education and training the University provides to aspiring journalists.”

Learn more about the new Charles Sturt Bachelor of Communication (with specialisations). The new degree has been co-designed, co-developed and is co-delivered with distinguished alumni and leading industry partners.