The annual SPRUNG Festival of theatrical performances at CSU in Bathurst has been nominated for public endorsement as Australia's Favourite Event. 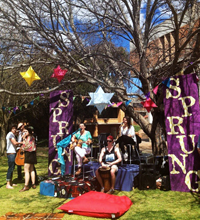 The annual SPRUNG Festival of theatrical performances at Charles Sturt University (CSU) in Bathurst has been nominated for public endorsement as Australia’s Favourite Event.
Ms Lucy Harrison, the coordinator of the 2012 SPRUNG Festival, said, “This is really exciting recognition for the festival. It has been staged for the past fifteen years, and what continues to make the festival a success is the strong sense of collaboration and community for students, educators and the region’s residents.”
The SPRUNG Festival held in September 2012 is nominated because the criterion is for events staged between 1 July 2012 and 30 June 2013. The SPRUNG Festival is an annual event produced by the CSU School of Communication and Creative Industries’ CYCLE Productions in Bathurst during each Spring, thus the 2013 SPRUNG Festival is ineligible for the current plebiscite.
“The festival showcases the ‘Major Work Research and Performance’ projects of students in the final year of the Bachelor of Communication (Theatre/Media), and the combined talents of 90 theatre/media students across all years, and has helped launch the careers of many graduates,” Ms Harrison said.
“Each year’s event is a really exciting mix of scripted drama, cabaret, quirky comedies, film, devised and physical theatre, and puppetry. The 2012 SPRUNG Festival saw the introduction of the Opening Night Parade, the Festival Marquee, and Crane Bar, while the 2013 Festival saw the introduction of SACK music night, which combined the talents of local Bathurst musicians and theatre/media students.”
Australia's Favourite Event is the public's chance to nominate and vote for the event that most engages them and earns their support. It is open to events such as music festivals, sporting events, community events, cultural and commemorative events. The winner will be announced at the Australian Event Awards Industry Night of Nights on Tuesday 19 November.
Public voting opened for Australia's Favourite Event yesterday, Monday 21 October, with over 7 500 votes already cast for 24 events across the country, including the SPRUNG Festival in Bathurst, Clipsal 500 Adelaide, BluesFest Byron Bay, Adelaide Fringe, Festival of Sails, Mumbrella360, RSPCA ACT Million Paws Walk, Illawarra Folk Festival, and Taste of Sydney.
To vote SPRUNG Festival as Australia’s Favourite Event, please visit www.eventawards.com.au/?v=Sprung and click vote. Voting closes Tuesday 19 November, is free, takes 15 seconds, and you can vote as often as you like.