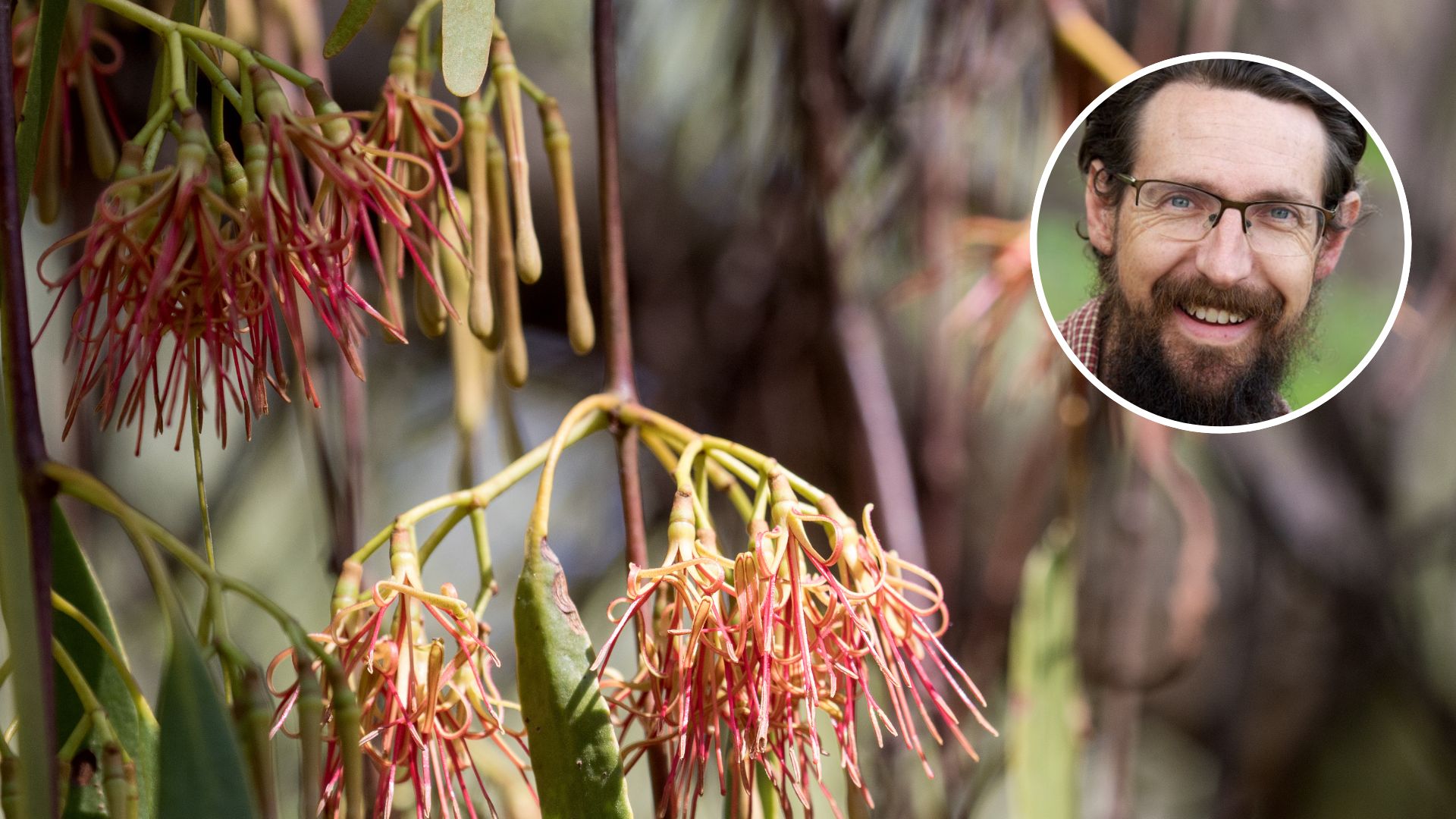 Professor in Ecology David Watson (pictured, inset) in the Charles Sturt School of Agricultural, Environmental and Veterinary Sciences, and the Gulbali Institute of Agriculture, Water and Environment co-authored a recently published research paper with lead author Dr Ross Crates from the Difficult Birds Research Group at the Australian National University, and other co-authors.

Their study summarises mistletoe and bird data from 2,111 monitoring sites across south-east Australia for five years.

“We monitored woodland birds throughout south-eastern Australia over five breeding seasons between 2016-17 and 2020-21, and spanning the major drought event in 2019 and 2020,” Professor Watson said.

“We found a very tight relationship between mistletoe occurrence and numbers of nectar feeding birds, but we also detected range-wide dieback of mistletoe at the latter stage of the 2019-2020 drought.

“This is very significant and timely given recent news about declines in Regent Honeyeaters and other nectar feeders across the country.”

The paper, ‘Mistletoes could moderate drought impacts on birds, but are themselves susceptible to drought-induced dieback’, was published in Proceedings of the Royal Society B (Biological Sciences), Volume 289, Issue 1978, 13 July 2022.

Professor Watson said, as his colleague Dr Crates has noted elsewhere, they noticed during their surveys that many mistletoes ─ a key breeding resource for regent honeyeaters and many other woodland birds ─ were suffering large-scale mortality.

“We counted the number of live and dead mistletoe clumps at each of our bird monitoring sites and looked at factors that might explain both, and it turns out the abundance of dead mistletoe was linked to low summer rainfall and high temperatures during the drought,” he said.

“Mistletoes have limited control over the rate at which they lose water from their foliage; they constantly depend on their host trees for water. When rainfall is low and temperatures are high, many mistletoes can’t get enough water and die.”

Professor Watson explained that during droughts, eucalypts rarely flower and insect biomass is low, and mistletoe nectar, fruit and foliage becomes an important resource for birds during drought because mistletoe flowering and fruiting phenology is consistent across years.

“We found that during the peak drought breeding seasons of 2018-19, and especially 2019-20, the strength of association between woodland bird abundance and remaining live mistletoe abundance increased,” he said.

“This suggests that mistletoes may help birds survive droughts, but if mistletoes suffer high mortality during droughts as they become more frequent/severe under climate change, birds will lose keystone species to help them survive those resource bottlenecks.”

The researchers are worried that drought-induced mistletoe mortality could contribute to ecosystem collapse under climate change.

To arrange interviews with Professor Dave Watson contact Bruce Andrews at Charles Sturt Media on mobile 0418 669 362 or via news@csu.edu.au.