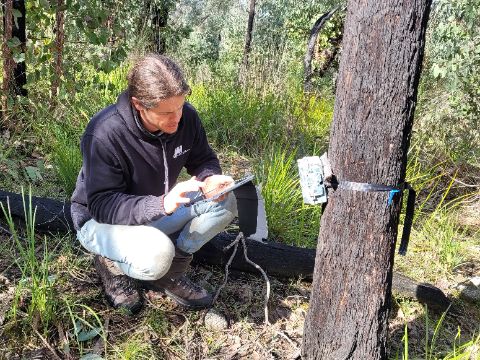 Mr Grant Linley (pictured, left) in the Charles Sturt Gulbali Institute of Agriculture, Water and Environment said his research obtained photographic evidence of a species, the heath goanna (also known as Rosenberg’s goanna), in Woomargama NP which has not been observed by scientists to occur in the park.

“This is unusual because the heath monitor (Varanus rosenbergi) is a very big lizard, up to one and a half metres long, and is listed as a threatened species in both New South Wales and Victoria,” Mr Linley said.

“I am using camera traps to try to capture which species are living in differing areas that burned during the 2019-20 wildfires, and the images I captured of the heath monitor exiting a wombat burrow are opportunistic.”

With National Threatened Species Day on Wednesday 7 September, Mr Linley’s finding is a timely reminder of the importance of environmental and ecological research.

Mr Linley said his study, ‘Impacts of the 2019-20 Australian fires on terrestrial mammal communities in the foothill forests of south-eastern Australia’, is part of a wider study which uses camera traps to see how wildlife was affected by the 2019-20 wildfires in the Upper Murray.

One chapter of his thesis explores which animals make use of wombat burrows throughout the region.

“This is an interesting finding given this goanna’s conservation status, and it’s an example of a species ‘hiding in plain sight’,” he said.

“The heath goanna has probably been seen previously but perhaps mistaken for the similar but more common and well-known lace goanna (Varanus varius), coupled with the fact the area has not been frequently surveyed in the past.” 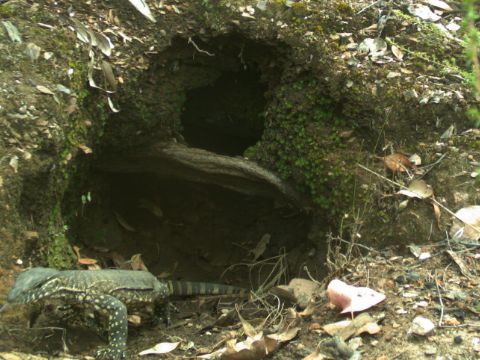 Mr Linley has no data on the heath goanna population numbers, and he said they are very restricted throughout their known range due to habitat loss, introduced predators, and inappropriate fire regimes.

“They are a predator, so their diet consists of birds, mammals, reptiles, frogs and invertebrates, and as an opportunistic generalist predator, within their niche, they undoubtedly have an impact on the functioning of the ecosystem around them.”

Mr Linley intends to update the Atlas of Living Australia with this new recorded sighting of the heath goanna.

For his study of wombat burrows Mr Linley placed 56 cameras on 28 burrows (one on a burrow and one nearby as a control). They were all deployed for approximately the same amount of time, during a 10-month period (start 27.6.2021, finish 28.4.2022). This yielded:

“In general, the habitat is responding according to the severity of fire at which it was burnt,” he said.

“In terms of the very high severity areas, while they are recovering it will be decades before they resemble anything like what it was before the fires.

“The overall contrast in structure of the vegetations is extremely stark between burnt and unburnt areas, and we’re only beginning to learn what that means for the region’s wildlife.”

To arrange interviews with Mr Grant Linley contact Bruce Andrews at Charles Sturt Media on mobile 0418 669 362 or via news@csu.edu.au

Bottom: A heath goanna at the entrance to a wombat burrow in Woomargama National Park; camera trap image provided by Mr Grant Linley