A CSU historian asks whether Anzac Day functions as a kind of alternative religion or 'civil religion'. 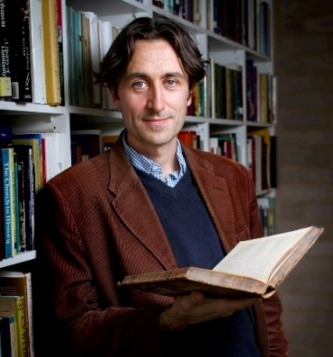 A Charles Sturt University (CSU) historian asks whether Anzac Day functions as a kind of alternative religion or 'civil religion'.

Lecturer in history at St Mark's National Theological Centre, a partner in the CSU School of Theology, Dr Michael Gladwin (pictured) will deliver a public lecture in Canberra on Tuesday 26 April in which he will argue that as Australia's unofficial national day, Anzac Day has played an influential yet contested religious role in our national life.

This free public event comprises four public lectures that explore the complex relationship between Christianity and Anzac Day commemoration, and how we might rightly remember both Anzac Day and war more generally.

"Christian imagery, ritual and liturgy profoundly shaped the first Anzac Day service in April 1916," Dr Gladwin said. "But exactly a century later, some commentators have suggested that the day functions as a kind of alternative religion, or 'civil religion', with its own sense of the mystical, transcendent and divine.

"This perceived shift raises pertinent questions about the relationship between war, memory and religion in Australia, and the opportunity to consider how the religious complexion of Anzac Day has changed over the course of the last century."

Dr Gladwin said the public lecture will consider the formative influence Christianity had on the shape of the Anzac Day commemoration, noting that Army chaplains were directly involved in the creation of its distinctive ritual and forms, in conducting actual ceremonies, and in debating whether the day's 'proper' form and function should be solemn commemoration or celebration.

"Anzac Day commemoration was initially marred by sectarian divisions between Catholics and Protestants, although these differences were largely resolved by the 1960s when Catholic and Protestant leaders found ways to compromise for the sake of unity," Dr Gladwin said.

"During the period before 1965 there were also tensions between the churches and the Returned and Services League (RSL), particularly in years when Anzac Day fell on a Sunday.

"In the decades after, however, both churches and the RSL were beset by concerns that they were 'out of touch' with the younger generation. Churches noticed declining membership, especially among youth, while the RSL contended with a radicalised Vietnam War generation who protested against selective conscription and criticised Anzac Day as an outdated form of militaristic nationalism that smacked of chauvinism, racism and anachronism. Alan Seymour's play, The One Day of the Year, most famously captured this mood."

Dr Gladwin observes that much to its critics' surprise, however, Anzac Day rebounded in the 1980s on the back of a worldwide 'memory boom' and in an Australian climate of growing nationalist sentiment and introspection. Historians such as Carolyn Holbrook have observed that after 1990 Anzac Day commemoration attracted political patronage and the Anzac legend was repackaged – without its earlier racial, martial and imperial overtones – as a protean 'story of national genesis' that could flexibly accommodate a wide spectrum of Australians.

"This resurgence of Anzac Day in the last 30 years has seen the Anzac 'legend' or 'myth' become increasingly etched into the collective national psyche," Dr Gladwin said. "The emphasis of Anzac Day is no longer on military skills but rather values of unpretentious courage, endurance, sacrifice in the midst of suffering, and mateship. Anzac Day provides universally recognised symbols and rituals to enshrine transcendent elements of Australia's historical experience, making it a quasi-religion, or at least a 'civil religion'.

"Many Christians, chaplains included, have envisioned this Anzac civil religion as both a challenge and an opportunity. On the one hand it represents a quasi-religious alternative to Christianity's deeper and more clearly articulated traditions and spirituality. On the other hand, it is an opportunity to locate points of cultural connection between the Anzac legend, the Christian faith and the spiritual aspirations of Australians.

Dr Gladwin says that despite changes in the religious complexion of Australian society since the 1960s, Anzac Day services retain a significant Christian component in terms of their substance, hymns and liturgical shape.

"Chaplains are still called on regularly to give Anzac Day addresses and the demand for the involvement of chaplains in Anzac Day commemorations remains particularly strong for those who serve or have served in the armed forces," he said. "Christianity has remained integral to Anzac Day commemoration throughout its first century."

For more information see http://www.stmarks.edu.au/blog/entry/anzac-day-remembering-for-all-the-wrong-reasons or contact St Mark's on (02) 6272 6252.

The main address of the evening will be from St Mark's history lecturer Dr Michael Gladwin who will consider how Anzac Day's religious complexion has evolved over the last century.

This will be followed by St Mark's lecturer Rev. Dr Jeanette Mathew's discussion of contemporary counter-movements in the remembrance of war.