An internationally recognised CSU theology academic has been presented with a commemorative book of essays in his honour (known as a festschrift) by scholars in Indonesia. 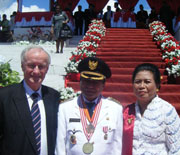 An internationally recognised Charles Sturt University (CSU) theology academic has been presented with a commemorative book of essays in his honour (known as a festschrift) by scholars in Indonesia.
The book, titled Injil dan Budaya: Teman atau Musuh?  (Gospel and Cultures: Friends or Foes?), was presented to Reverend Professor James Haire, AM, in the Molucca Islands in Indonesia on Saturday 18 August.
Reverend Professor Haire is Professor of Theology at CSU, as well as Executive Director of the Australian Centre for Christianity and Culture and Director of the Public and Contextual Theology Research Centre in Canberra.
The English title of the book is Gospel and Cultures: Celebrating 40 years of Theological Service of Professor Dr IJM Haire, and is published in the ‘Bahasa Indonesia’ language by a major academic publisher in Yogyakarta, Central Java, the academic and cultural centre of Indonesia. It was edited by three former colleagues, contains seven of Reverend Professor Haire’s Indonesian writings, and contributions from 14 international scholars and his former PhD students. There is no English language version presently, but it is hoped that it will be translated.
Gospel and Cultures marks the 40th anniversary of the beginning of Reverend Professor Haire’s theological service around the world. He worked full-time in theological education in Indonesia from 1972 to 1985, and since 1985 has been a visiting professor at two Indonesian universities. In January 2012, he was appointed Professor for Life at the University of Halmahera, and the James Haire Research Centre associated with the University was inaugurated in his honour.
Reverend Professor Haire said, “I am very touched with the presentation of this book of essays by my academic colleagues and former PhD students, and primarily moved by the response of their writings, because they have interacted so precisely and carefully with the issues that I have been putting forward throughout my career.
“I am particularly glad that it has been published in Indonesia, in the Indonesian language, as that has been where the central issues of the relationship between faith and cultures, especially Christian faith and cultures, has been played out in such a significant way. It is also very pleasing that the book has sold so well, largely because of the high quality of the chapters by my colleagues.”
A seminar on the book was held after Gospel and Cultures was presented to Reverend Professor Haire. Four scholars, including a senior Indonesian government official, made half-hour presentations on the topics of the book chapters, to which Professor Haire responded.
Scholars who contributed to the book include Professor JAB Jongeneel, recently retired as a Professor of Theology at the University of Utrecht, The Netherlands; Professor JS Aritonang, Professor of Theology in Jakarta, Indonesia; and Professor AN Yewangoe, President of the National Communion of Churches of Indonesia, and Professor of Theology in Jakarta.
Read more about Reverend Professor Haire here.