Australian researchers including a CSU team have unravelled the molecular makeup of a virus threatening some of the world's most endangered native bird species. 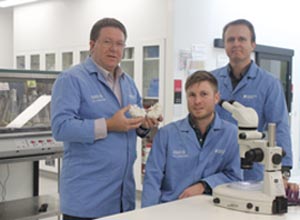 Australian researchers have unravelled the molecular makeup of a virus threatening some of the world's most endangered species, paving the way for the potential development of a vaccine to save dwindling populations of the Australian birds.

The research, led by Charles Sturt University (CSU) scientists and published in the prestigious international journal Nature Communications overnight, revealed the structure of the smallest self-replicating virus behind the beak and feather disease (BFD).

The virus causes a debilitating disease affecting four rare species of native parrot, including the Western ground and Orange-bellied Parrots, of which less than 50 remain in the wild.

CSU Professor in Veterinary Pathobiology Shane Raidal said, "The finding is significant because, by confirming how the viral structure forms, we can begin to develop a vaccine to interrupt these processes." 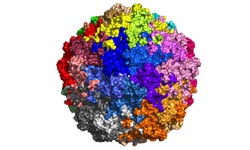 The BFD virus programs only two proteins to drive its replication and spread: one to assist the reproduction of the viral DNA, and one to construct the outer shell of the virus. This shell is built from 60 individual capsid proteins that self-assemble and fit together in a highly specific and ordered arrangement around the viral DNA.

The outcomes of this research provide the atomic coordinates of approximately 200 000 atoms which make up the virus, and insights into how the viral DNA can bind to the shell, ensuring the protection and delivery of the viral DNA.

At the Australian Synchrotron in Melbourne, landmark research infrastructure of the Australian Nuclear Science and Technology Organisation (ANSTO), the Micro Crystallography (MX2) beamline produced X-rays more than a million times brighter than the sun to create intricate diffraction patterns as light bounced off microscopic crystals of the viral capsid proteins. This allowed the researchers to identify the locations of the individual atoms and broader structure of the viral shells in stunning 3D detail.

The research team, involving scientists from CSU, Monash University, the Australian Synchrotron, and Spain's National Microbiology Centre and the Autonomous University of Madrid, have been working on the project since 2009.

Along with the loss of habitat and feral predators, the BFDV is one of the main threats to the affected parrots, which also include the Norfolk Parakeet (Norfolk Island) and the Swift Parrot (eastern and southern states). Infected birds face starvation and death as their feathers moult and their beaks soften. 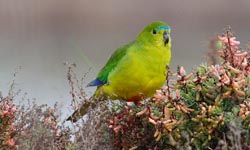 Professor Raidal said, "The disease has caused significant problems, in particular, for the Orange-bellied Parrot since 2006 when it reappeared in the captive recovery program.

"The Parrot is a small and vulnerable migratory bird which breeds only on Tasmania's south-west coast, flying north to spend the winter in coastal Victoria and South Australia, so we look forward to building on this work to find new approaches to restoring their numbers in the wild."

"BFDV is an awful disease, especially in small, short-lived species like Orange-bellied Parrots – young birds with the virus stand little chance of survival in the wild, and affected captive birds are often compromised, as the virus can affect the bird's ability to fight off other health issues."

"Although recent Orange-bellied Parrot recovery efforts have proven effective, in 2014 the wild population suffered from a spillover of BFDV (from another wild species) and we believe there are currently less than 30 birds out there - another outbreak of the disease in the wild would be a disaster, so the ability to vaccinate would be a leap forward in parrot conservation, also benefitting captive populations and our ability to release to the wild."

Professor in Veterinary Pathobiology Shane Raidal is in the School of Animal and Veterinary Sciences at CSU in Wagga Wagga. He is also Director of the University's Veterinary Diagnostic Laboratory.

Professor in Biochemistry Jade Forwood is an Australian Research Council (ARC) Research Fellow (2013-2016) in the School of Biomedical Sciences at CSU in Wagga Wagga.

National and international partners for this research were the Australian Synchrotron and Monash University in Victoria, and the Centro Nacional de Microbiologı and the Insituto de Fısica de la Materia Condensada, Universidad Autonoma de Madrid, both in Spain.