Frogs are often associated with wet tropical forests or vast swamps, not in the dry lands of southern NSW, which a CSU researcher Dr Carmen Amos to investigate the state of frog populations in the region and the factors influencing them. 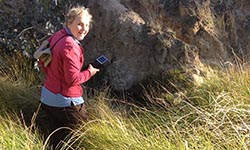 Frogs are often associated with wet tropical forests or vast swamps, not in the dry lands of southern NSW.

Frogs are sensitive indicators of the state of the environment, which drew Charles Sturt University (CSU) researcher Dr Carmen Amos (pictured left) to investigate the state of frog populations in the region and the factors influencing them.

“I wanted to know what specific environmental variables influenced frog species in semi-arid Australia, so we can better manage habitat for their survival.”

“I found that while all the frogs had their own relationships with this semi-arid environment, water was often an important driver for the survival of these creatures,” Dr Amos said.

“Therefore, it is important to understand how they interact with aquatic habitats across semi-arid landscapes, such as along the Lachlan River, so native animals such as frogs can be supported.

“My research highlighted the factors, particularly involving water, that could help improve the management of wetlands and rivers upon which our native frogs depend.

“Frogs interact with the environment at all different physical scales and each species has a different relationship with what is around them.

“This study increases our understanding of these complex relationships, and ultimately can assist with frog conservation in the semi-arid regions of Australia.”

Aim: to study frog populations in streams and on floodplains in a semi-arid environment in southern Australia over time and distance.

Location: Semi-arid catchment of the mid- to lower-Lachlan River, in NSWSupervisors: Associate Professor Skye Wassens and Professor Gary Luck from the CSU Institute for Land, Water and Society.

The research was in four parts: 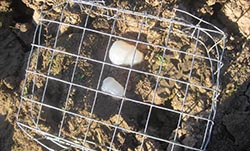 - calling activity in response to environmental factors collected by automated call recorders at ten sites between 2010 and 2013;

- microhabitat studies at six sites in 2013;

- Each individual frog species had a unique relationship with the environmental factors.

- Water availability, was a main driver for frog populations, being present in top models for four of the five species. The call activity of four species was examined.

- Call activity was promoted by different environmental variables for each species. For example, the burrowing species Giant Banjo frogs called mainly after rainfall, and to a lesser extent affected by declining periods of moonlight. On the other hand, the Peron’s tree frog was driven by warmer temperatures.

- The common spotted grass frog preferred to climb into soil cracks rather than hide under vegetation or logs, stick and litter to reduce water loss. These soil based microhabitats provide important shelter for these ground frogs during the drying daytime conditions.

For interviews with Dr Carmen Amos, contact CSU Media. Dr Amos will also be available for interviews and pictures at 10am on Friday 12 January around the wetlands at CSU in Albury-Wodonga. Meet at the School of Environmental Sciences carpark, off Elizabeth Mitchell Drive, Thurgoona.

Dr Amos graduated with her doctorate last December from the CSU School of Environmental Sciences. She is currently employed by the NSW Office of Environment and Heritage.

Scientific report from the research: