Over 350 delegates from 40 countries around the world will gather for Fish Passage 2018, a major international conference to run in Albury from Monday 10 to Friday 14 December.

* Over 350 delegates will gather in Albury for the international Fish Passage 2018 conference.

* Fish passages help migrating freshwater fish swim around man-made dams so they can successfully continue to grow and breed.

* Delegates will learn about the latest research and technology in fish passages to help maintain populations of migratory fish, including species in Australia’s Murray Darling Basin.

Over 350 delegates from 40 countries around the world will gather for Fish Passage 2018, a major international conference to run in Albury from Monday 10 to Friday 14 December.

Hosted by Charles Sturt University (CSU) and the NSW Department of Primary Industries (NSW DPI), conference participants will view and assess the ‘state-of-play’ of fish passage technologies currently in use worldwide.

Fish passages, also called fishways or fish ladders, help freshwater fish to navigate around man-made infrastructure such as dams and weirs so they can continue to grow and breed successfully upstream from man-made structures. 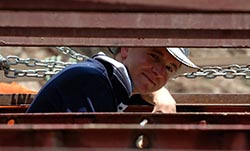 “This is the first time this event has been held in the Southern Hemisphere, and we are keen to show the recent advances we have made here in Australia and in Southeast Asia in fish passage technologies,” said conference co-convenor Dr Lee Baumgartner (pictured left in a Lao fish passage), who is with the CSU Institute for Land, Water and Society,

“Humans have changed many major river systems worldwide, including the Murray Darling Basin in Australia, by building dams across and channels from rivers to supply water for towns and agriculture,” he said.

“And our native fish are no longer near as abundant as they were before European settlement.

“In this conference, we investigate possible management strategies and structures, including fish ladders, that can assist maintaining or even re-building native fish populations in our rivers.”

Researchers, engineers, users, educators and regulators from North and South America, Asia, Africa and Europe as well as Australia will gather in Albury to discuss advancements in technical fishways, ‘natural’ fishways, stream restoration and stabilization, dam removal, environmental flows and fish responses, and the myriad of funding, climate change and socio-economic issues around projects that use fish passages to re-connect river habitats.

In addition, fish passages have become essential for planning and building hydropower projects around the world including Australia and Southeast Asia.

Events during the conference, also known as the International Conference on River Connectivity, include:

* A free public lecture by Dr Zeb Hogan (pictured with a Murray cod), the celebrity host of #MonsterFish on the National Geographic channel, who will take his audience on a journey of his travels to find giant migratory freshwater fish around the world: read details here.

* A full Wiradjuri welcome to country, including smoking ceremony, to be held for conference delegates on Monday 10 December, starting at 5.45pm in front of the Albury Entertainment Centre, Dean St, Albury.

* A pre-conference forum addressing water management, inland fisheries and ecosystem services provided by rivers around the world, including the Murray Darling Basin, on Monday 10 December at CSU in Albury-Wodonga.

Among the 220 presentations during the conference, some notable papers include:

* ‘Build it and they will come.  Or will they? Golden Perch in Koondrook Perricoota Forest’, by Dr Wayne Robinson, Institute for Land, Water and Society, CSU in Albury-Wodonga.

“We report on an acoustic monitoring survey in 2016 when during a natural flood, none of 14 tagged Golden Perch tagged in the adjacent main river channel entered the Koondrook Perricoota Forest from the Murray River. Yet at the same time, 34 of 44 tagged Common carp moved into the forest when passage became available from rising waters. Furthermore, monitoring over seven years on the Forest floodplain during Autumn has failed to sample any young golden perch fingerlings, while only two adult golden perch have been found in the Forest during that time.

Fragmentation of river systems by dams and weirs is a major factor in the decline of riverine fishes, due to interruption of their migratory pathways. The leading strategy for dealing with these impacts has been installing fish passage structures. This strategy assumes that successful upstream migration is required to ensure reproduction and recruitment. However recent studies from South America have shown that this strategy may be flawed, creating situations where fish migrate upstream to less favourable habitats for breeding than those downstream, known as an ecological trap. The authors have developed a computer model to assess if fish passages can act as an ecological trap, depending on the availability of suitable spawning and nursery areas upstream and downstream of barriers. The model simulates possible effects of a ‘hypothetical’ fish passage on the recruitment and abundance of Murray cod and Golden Perch in a regulated low-land river in Australia. The model follows individual fish based on existing data and assumptions about migratory behaviour, habitat requirements and environmental parameters. The model aims to show the knowledge gaps and future research required for fish passage, migratory behaviour and recruitment of migrating fishes in regulated rivers with dams and weirs.

Fish communities are becoming increasingly threatened in many tropical river-floodplain systems due to the construction of dams and other physical barriers. Efficient tagging techniques are urgently needed to better understand the movement of these fish, at a base level and when they encounter barriers. Passive Integrated Transponder, or PIT, tagging has been successfully used to track many fish species in temperate regions, but its effectiveness on tropical riverine species remains largely untested. We investigated the potential use of PIT tags in two tropical species from the Mekong River, Striped catfish the Goldfin tinfoil barbs. We assessed if the fish retained the tags without affecting them, and where was best. We showed that PIT tags can be retained in the chest, gut or shoulder without affecting mortality or growth for either species, suggesting that PIT tags could be successfully used in a range of body locations in Striped catfish and Goldfin tinfoil barbs in the Mekong River, however gut tagging is most likely as any fish caught in the Mekong are eaten by local people.

* ‘A cautionary tale about the inhibitory effects of gated culverts on fish passage restoration efforts’, by Dr Nathan Ning, Institute for Land, Water and Society, CSU in Albury-Wodonga.

Connectivity between river-floodplain habitats has been heavily constrained in many large tropical river systems by the construction of flood regulators, levees and other physical barriers. Fishways are being constructed to reduce the effects of these barriers; but it is important that all aspects of fishway design cater for local target species. We investigated the movement patterns of Lower Mekong Basin fish in Laos, through a fishway that incorporated a series of cones, resting pools, and a culvert with a vertical lift gate. We showed that while fish could negotiate the fishway, they could not get through the culvert once it was flooded. This hampered the effectiveness of the fishway during flooding, which occurs annually during the monsoon season.

* ‘Will they stay or will they go? Movement and recruitment dynamics of an iconic Australian freshwater fish in a cold-water impacted River’, Zeb Tonkin, Arthur Rylah Institute, Victorian Department of Environment, Land, Water and Planning

The construction of large water storages and subsequent alteration of flow regimes and thermal pollution have devastated native freshwater fish populations globally. Native fish populations in the lower reaches of the Mitta Mitta River in Australia have declined substantially since the construction and operation of Dartmouth Dam since the 1970’s. Self-sustaining populations of Trout cod and Murray cod were reported to have substantially declined or become locally extinct in the river by the early 1990’s, attributed largely to the largely annual release of cold water during spring and summer from the dam. Recent recreational fishing reports and fish surveys have detected Murray cod again occupying this reach of river. This prompted managers to reconsider the general view that the reach is unsuitable for native fish. We present outcomes of a research project aimed at improving the knowledge of the Murray cod population in the lower Mitta Mitta River to guide improved river operations and management. We investigate patterns of recruitment dynamics, movement and hydrological records to understand the role of water operations in influencing population dynamics of Murray cod in the lower reaches of the River. We then use this information in a model to explore possible long-term trajectories of the population using various management scenarios.

Dams, weirs, irrigation infrastructure and regulators impact connectivity among habitats and can cause rapid declines in river species, especially fish. Indonesia is a tropical island country with an abundance of monsoonal rivers. Massive expansions in hydropower and irrigation infrastructure are planned over the next two decades and mitigation measures will be needed to protect migratory fish. Most Indonesian freshwater fish need to migrate between habitats to complete essential life stages. Strategies are urgently needed to mitigate the barrier effects of river infrastructure to ensure the long term sustainability of river fishes, which provide food and livelihoods for many people. A common tool used worldwide to aid fish migration is the construction of upstream and downstream fish passes. Two fish passes exist in Indonesia, one on the Komering River on Sumatra island, and another on the Poso River on Sulawesi island. Neither structures have been assessed and many other projects are proceeding without considering potential fisheries impacts. Proposed infrastructure upgrades over the next two decades provides a once-in-a-generation opportunity to ensure that migratory fish are adequately protected from infrastructure projects. There is an urgent need to collect and apply ecological and hydrological criteria to develop effective fish pass designs to protect fisheries resources on which local people depend for food.

Biodiversity conservation in the Amazon River basin is historically an unparalleled task, but with the recent construction of big dams, managing long distance migratory fish is proving even more challenging. The “dourada”, a goliath catfish species, has the long river migration in the world 5,700 km, with adults swimming from the lower end of the basin to spawning areas located in the Andes. In the Madeira River, one of the main routes to spawning areas, two hydropower plants with a river-free stretch between them started to run between 2011 and 2013. Our studies are investigating the behavior of goliath catfish species in the area after the dams were built. Douradas captured downstream of the Santo Antônio Dam, tagged with combined acoustic and radio transmitters were not detected passing the 900 m long fishway up the dam. In the Santo Antônio reservoir, douradas larvae in different development stages were collected throughout the year. This shows that larvae collected in the Santo Antônio reservoir where from spawning that occurred in the headwaters of tributaries of Madeira River above the dam. As numerous new dams are planned for the upper portion of the Madeira River basin, this study has important implications the management and conservation of goliath catfish in the Amazon basin.

For a preliminary rundown on the conference,interviews will be available with Dr Lee Baumgartner at CSU in Albury-Wodonga at 12noon on Monday 10 December.

Further interviews will be available during the main conference which runs from Tuesday 11 to Thursday 13 December at the Albury Entertainment Centre and QEII Square, Dean St, Albury.

Listen to Dr Baumgartner speak about the current state of native fish in the Murray Darling Basin.

Find out about the free public lecture by Dr Zeb Hogan.