A CSU researcher is investigating the status of one of the last major populations of northern quolls before its habitat is invaded by cane toads. 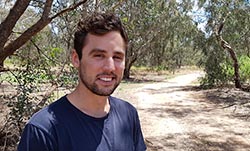 A Charles Sturt University (CSU) researcher is investigating the status of one of the last major populations of northern quolls before its habitat is invaded by cane toads.

“The Northern quoll – a native marsupial predator once found across northern Australia – has received widespread attention as its populations have severely declined presumably due to interactions with invading cane toads,” said Mr Harry Moore, a PhD student with the CSU Institute for Land, Water and Society.

The inquisitive, nocturnal omnivore (pictured below, 'captured' in a camera trap) often eats the toad and dies from poison ejected from glands on the toad’s back. The cane toad recently moved into Western Australia from the Northern Territory (NT).

“Northern quolls are believed to have declined in NT, and they are seriously depleted in Queensland. We need to find out more about the northern quoll as it is now on the national endangered list.”

“Much of our knowledge relating to the disappearance of the northern quoll is from word-of-mouth, however we are lacking hard numbers to support these trends,” Mr Moore said.

“Generating funding for conserving species is difficult. It’s important that management action is as efficient as possible to make best use of our funds.

“By providing quantitative data that measures quolls declines and describes patterns of persistence, we will provide decision makers with the most useful and accurate information possible.

“While the impacts of cane toads appear to have caused major decline in quoll populations in NT and Queensland, there is evidence to suggest they were declining preceding their invasion. This could be a result of predation from dingoes, feral cats and foxes, made worse by the role increasingly frequent fire and pastoralism play in removing vegetative cover.

“The Pilbara offers a great opportunity to study these other factors before the possible arrival of cane toads in the region.”

- Project aim: To quantify the current niche of the northern quoll and examine influence predators and fire may have on their persistence.

- Details: Northern quoll is a species of omnivorous marsupial found across the top third of Australia, from Queensland to Western Australia. There are six main populations remaining across Australia, including one in the WA Pilbara region.

-Mr Moore has set 120 remote sensing camera traps that detect moving animals in 12 sites across 6,000 square kms in the Pilbara to study the quoll’s habitat requirements.

-Investigating landscape properties associated with quoll presence as well as the potential impacts predators and fire may have on quoll persistence.

-Mr Moore is also mapping the distribution of the northern quoll, from Queensland to Western Australia, and how this has changed over time.

-Preliminary results have shown dingoes, feral cats and quolls all to be present within the study are, however the extent and nature of interactions occurring between these species has yet to be properly examined.

For interviews with CSU PhD student Harry Moore who is based in Perth WA, contact CSU Media.