Japanese interest in eucalypts and bushfires

A CSU botanist is continuing to share his insights into the survival secrets of the eucalypts during bushfires – this time to a Japanese audience.

A Charles Sturt University (CSU) botanist is continuing to share his insights into the survival secrets of the eucalypts during bushfires – this time to a Japanese audience. 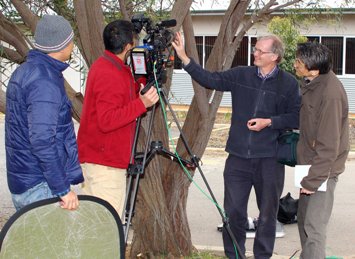 The film crew interviewed the CSU academic about his important research into why the eucalypts are some of the world's most successful post-fire re-sprouters.

"The crew from NHK's Science and Engineering Division was in Australia to cover post-fire regeneration of Australian forests for a program similar to Catalyst on ABC," Professor Burrows said.

The program, to be aired in October, links the images - taken from space by Japanese astronaut Dr Koichi Wakata on 4K video camera last January - with events happening in various parts of the world.

The images taken over Australia captured the bushfire in the Wollemi National Park.

"The crew first visited the National Park to see the site of the fire, the destruction and regrowth of the vegetation to illustrate the wonders of nature.

"Using a high power dissecting microscope I was then able to show them how the bud forming cells of the eucalypts are protected by the full thickness of the bark, while in acacias (killed by fire, regenerate by seed) the buds are right on the surface of the bark."

Professor Burrows' article, 'Buds, bushfires and resprouting in the eucalyptus'  was published in the Australian Journal of Botany, Vol. 61, No. 5, pages 331-349 in August 2013. Associate Professor Burrows is a member of the Graham Centre for Agricultural Innovation – a research collaboration of CSU and NSW Department of Primary Industries.

The film crew left Australia for Mexico to cover a meteor crater and its association with the extinction of the dinosaurs.