CSU fish scientists are working with partners to make public a huge database of information on native fish living in rivers across southern Australia.

Fish scientists at Charles Sturt University (CSU) are working with partners to make public a huge database of information on native fish living in rivers across southern Australia. 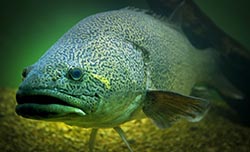 "Over the past 10 years, scientists have tagged over 75 000 fish using microchips, the same technology used to identify pet cats and dogs, to help study fish migration up and down rivers in the southern Murray Darling Basin," said Dr Lee Baumgartner, a leading fish ecologist with CSU's Institute for Land, Water and Society.

"We have strategically-placed listening stations along the Murray River to study the movements of these fish, many of which are either endangered or highly prized by anglers.

"The listening stations have been installed into fish ladders, structures that allow fish to swim past dams and weirs built across streams.

"Each time a tagged fish passes a listening station, the tag number, time and location are transmitted to a centralised database known as FishNet.

"To date, we have over 50 million detections in the FishNet database. This provides invaluable information on how fish respond to events such as environmental flows, natural floods, 'blackwater' events and spawning cues," Dr Baumgartner said.

FishNet is the brain child of Melbourne-based IT firm KarlTek Pty Ltd.

"The user friendly website is regularly updated and has been specifically developed with anglers and school children in mind," Mr Pomorin said.

"However, in line with the Australian Open Data policy, the project ultimately aims to ensure that data collected using public money is available to everyone with internet access."

CSU and KarlTek are now looking to improve public access to this information through a project funded by the Australia National Data Service (ANDS), a project supported by the Commonwealth government under the National Collaborative Research Infrastructure Strategy program.

A summary of fish detection data from Lock 10 near Wentworth on the Murray River is available here. Users can navigate the site to see the proportion of different fish species that have passed Lock 10 over the past year.

It also includes an interface which demonstrates the total river kilometres travelled by some of the big 'movers' along the rivers.

"We are regularly seeing fish travelling hundreds or thousands of kilometres. These fish are really moving up and downstream over many years," Dr Baumgartner said.

"It clearly shows that not only are environmental flows helping fish move around the river system, but that fish ladders installed along the Murray River are working."

It is planned to widen data access to other sites along the Murray River.

The summarised FishNet data can be seen at http://fish.karltek.com.au. Staff at KarlTek point out that fish movement in the Murray River during winter is minimal, compared with warmer seasons. Therefore, no fish detections have been recorded at Lock 10 in the last month or week. This is expected to change as warmer spring weather arrives.