The discovery of a parasite in carp in the Murray Darling Basin has prompted a CSU scientist to call for more research before the release of the carp herpes virus. 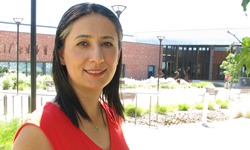 The discovery of a parasite in carp in the Murray Darling Basin has prompted a Charles Sturt University (CSU) scientist to call for more research before the release of the carp herpes virus.

Associate Professor Shokoofeh Shamsi, a member of the Graham Centre for Agricultural Innovation, found the parasite along with CSU Bachelor of Animal Science (Honours) student Ms Anna Turner in carp collected by Dr Skye Wassens from the Institute for Land Water and Society (ILWS).

The discovery is documented in an academic paper published in the Journal of Helminthology.

"This particular type of parasite from the Contracaecum genus, is a unique Australian species found in Pelicans in the Northern Territory," Professor Shamsi said.

"Our discovery of the parasite in the intestinal tissue of carp from a lagoon in the Murrumbidgee National Park is significant because it shows the role of migratory birds and introduced species such as carp in distributing zoonotic pathogens like this parasite across the continent and from marine to freshwater environments.

"It's also a potentially dangerous parasite because human infection has been reported in Australia and overseas after the consumption of infected fish."

Professor Shamsi said the infection of a highly resilient invasive fish, like carp, could also have implications for aquaculture and for environmental authorities.

"There's a lot of discussion about carp control measures, including the release of the herpes virus," Professor Shamsi said.

"We do know from other countries that the parasite is not host-specific, or in other words it's not choosy about the type of fish it infects.

"Our research highlights the need for more research about parasites in introduced species like carp, along with native freshwater fish to ensure we have an understanding of the full impact of measures to control carp."

Professor Shokoofeh Shamsi is based at CSU's School of Animal and Veterinary Sciences at CSU in Wagga Wagga. To arrange interviews contact Graham Centre communications officer Ms Emily Malone on 0439 552 385.