CSU researchers have found a population of rare Macquarie perch in an isolated creek flowing into the upper Murray River and are now working to conserve and grow the numbers of this threatened species. 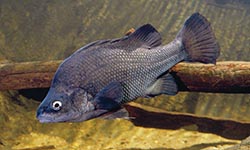 Charles Sturt University (CSU) researchers have found a population of rare Macquarie perch in an isolated creek flowing into the upper Murray River and are now working to conserve and grow the numbers of this threatened species.

This follows the 2009 finding by former CSU Masters student Mr Luke Pearce and is the only known population on the NSW side of the Murray River catchment. 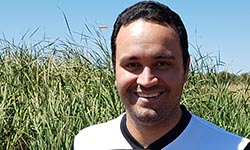 “We are happy to report that there are more Macquarie perch in this creek than when it was last monitored in 2009. Our team is now focused on determining the extent and sustainability of the current population and types of habitats that these fish need to survive and thrive,” Dr Silva said.

“While this rare fish is reportedly surviving on the Victorian side of the upper Murray in Dartmouth Dam, we are concerned with the declining numbers. This appears due to changed water flows, declining habitats and increased competition and predation by invading fish such as Redfin perch and European carp.

“We are now investigating what habitats Macquarie perch prefer to inhabit in the creek. Do they like snags or runs, riffles or pools? Are there potential breeding habitat for the species? Answers to these questions help us build a better picture of what a creek should look like to save this and other native fish species.

“Building up that knowledge is critical to the development of survival and on-going management techniques to improve creek habitats suitable for Macquarie perch.

“Our team expect to make recommendations to the NSW Department of Primary Industries - Fisheries and Murray Local Land Service for a management plan to help conserve the threatened Macquarie Perch,” Dr Silva concluded.

The habitat mapping of Mannus Creek was conducted in November 2017 along 65 kilometres of the creek. Habitats in parts of the creek bed have been digitally mapped in detail to be able to relate fish numbers to habitat type.

The team is now analysing results from the second monitoring event in February, looking to match population numbers with types of habitats and will make recommendations to the Department of Primary Industries.

For interviews and pictures with Dr Luiz Silva, who is based in Albury, contact CSU Media.