A team of internationally recognised researchers led by a CSU ecologist aim to solve a scientific riddle when they search for an ancient mammal in the rugged Kimberley region of Western Australia. 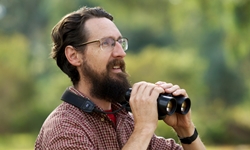 A team of internationally recognised researchers led by a Charles Sturt University (CSU) ecologist aim to solve a scientific riddle when they search for an ancient mammal in the rugged Kimberley region of Western Australia.

With the help of trained sniffer dogs, remote cameras, a small army of volunteers and old fashioned scientific detective work, CSU Professor of Ecology David Watson and his team are looking for the long-beaked echidna.

They hope to verify the stories of local Aboriginal communities.

Professor Watson said, "The Miriwoong Gadjerong and other local communities recognise two species of echidna: the common short-beaked echidna found across Australia, and 'the other one'.

"We believe this is the long-beaked echidna, the oldest known remaining mammal in the world and currently only known to be in steamy rainforests of New Guinea.

"A specimen recently turned up in a London museum of an animal collected near Mount Anderson in 1901, the first direct evidence that long-beaked echidnas persisted in Australia until very recently. 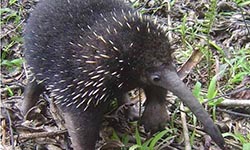 "We want to know if these beautiful creatures, reminders of a time when giant kangaroos and giant wombats roamed across Australia, are still alive in the remnant pockets of rainforest found in deep gorges scattered across the Kimberley region," said Professor Watson from CSU's School of Environment Sciences.

There's a sense of urgency about the search.

"We know that cane toads are marching across northern Australia—they're currently only 200 kilometres away, and are already breeding in east Kimberley. We must conduct this survey before they get there so we know what and where native fauna are in the region, and how we can help protect them in coming years if they are to survive this toxic wave," Professor Watson said.

Rather than capturing animals during the survey, the research team will install motion-triggered cameras in the isolated rainforest pockets and on coastal islands only accessible by helicopter.

"We plan to set up camps over the survey region this September, staffed by our research team and groups of volunteers.  They will fan out from the camps to catalogue birds, mammals and reptiles while keeping an eye out for any signs of the long-beaked echidna.

"We will also use the dogs to sniff out echidna and other droppings, and test the DNA in them to identify of the producers of dung samples," Professor Watson said.

"This so-called scat analysis is a vital part of modern ecological studies."

The researchers plan to conduct a three week field-trip to consult with traditional Aboriginal owners, establish two base camps in the west Kimberley, install motion-triggered cameras, and select potential sites for comprehensive surveys.

After a brief trip early in the 2018 dry season to recover cameras, confirm survey locations, and organise helicopters and food drops, the main expedition will be conducted between September and November in 2018, with teams of scientists and volunteers radiating out from both base camps to complete the survey.

"My alter ego 'Doctor Dave' will come with us next year to provide live updates from the field to explain the progress of the search through social media and live streaming. This will be a fabulous opportunity to see research live in the wild wherever they are in Australia or the world, especially in schools.

"By engaging directly with school students and the wider community, I hope to share the sense of adventure that motivates me as a scientist." See 'Dr Dave' in the wild here.

Professor Watson is not surprised that researchers are still finding new species in Australia.

"You would think that in this day and age we would know all the animals on this continent, especially a 15-kilogram mammal such as the long-beaked echidna," Professor Watson said.

"However, with its complex rocky coastline, almost 3 000 islands, impenetrable networks of gorges, rainforests surrounded by steep cliffs, and vast areas of wilderness, the Kimberley is one of the least explored regions on Earth.

"The recent rediscovery of the Night Parrot, which was thought to be extinct, shows it's possible for an echidna population to hide in an isolated gorge all these years.

"It's exciting and daunting and makes me very, very curious."

Professor David Watson in the School of Environment Sciences at CSU in Albury-Wodonga. He is a member of the University's Institute for Land, Water and Society.