The low-growling call of the southern bell frog in a lagoon in the mid-Murrumbidgee River has CSU researchers excited.

The low-growling call of the southern bell frog in a lagoon in the mid-Murrumbidgee River has Charles Sturt University (CSU) researchers excited. 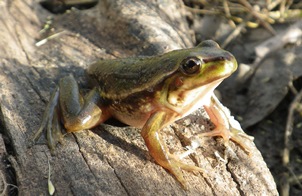 Monitoring by the researchers from CSU's Institute for Land Water and Society has shown this threatened frog species breeding in the mid-Murrumbidgee wetlands, the first recorded breeding in more than 40 years.

"There hasn't been a record of them breeding in the mid-Murrumbidgee wetlands since the 1970's.

"Our 2015 monitoring found new juveniles, metamorphs, tadpoles as well as adults calling which shows that they are breeding successfully."

One of the largest frog species in Australia, southern bell frogs are bright emerald green with brown and golden patches.

In 2014 the NSW Office of Environment and Heritage, Riverina Local Land Services, and a local landholder upgraded existing irrigation infrastructure to allow Yarradda Lagoon, a key wetland in the mid-Murrumbidgee to be filled by pumping with water supplied by the Commonwealth Environmental Water Holder.

Later that year the monitoring team lead by Dr Wassens recorded inland banjo frogs breeding at the wetland for the first time.

Now southern bell frogs have also colonised the wetland and are breeding successfully.

"The frogs probably came in through the irrigation canals," said Dr Wassens.

"While creating natural reconnections is still the top priority for the mid-Murrumbidgee wetlands, using pumps to fill wetlands may be particularly beneficial for frogs because pumping tends to exclude adult carp from wetlands.

"It was a big investment to upgrade the infrastructure and supply the water, but it appears to have paid off."

As well as southern bell frogs, the monitoring project team have also recorded large numbers of cormorants and darters nesting in the lagoon.

The LTIM Project for selected areas of the Murrumbidgee River system is funded by the Commonwealth Environmental Water Holder and is being undertaken from 2014 to 2019.  Read more on CSU News here.

Contact CSU Media to arrange interviews. Dr Wassens is based at the Institute for Land, Water and Society at CSU in Albury-Wodonga.