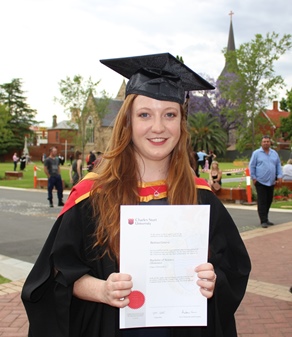 Ms Grieve recently graduated with a Bachelor of Science (Honours) and her research in Laos PDR examined the effectiveness of Passive Integrated Transponder (PIT), or microchip, tagging on two species of Mekong River fish.

"The Mekong River is experiencing unprecedented development for hydropower," Ms Grieve said. "Fishways have been proposed as a method to mitigate the impacts of this development on fish migration and biodiversity, so tagging is a way of measuring if the strategy is working."

Microchip tagging is already used in Australia to measure fish migration but this was the first time the technology had been assessed on the Mekong native fish species; striped catfish and goldfin tinfoil barbs.

"The research aimed to determine the best physical location to apply the device, in the chest, gut or shoulder," Ms Grieve said.

"I found the overall retention rate and survival from tagging was high for both species, with no difference in the tag rejection rates or survival rates between the different tagged locations for both species.

"In addition, there was no difference in weight change between the different tag locations for both species.

"The Mekong River is one of the most biological diverse river systems in the world and is renowned for its fish fauna, home to an estimated 1 200 species of tropical fish.

"This study showed that PIT tags are an effective method to use on selected Mekong species and could form the basis for migration studies in the future." 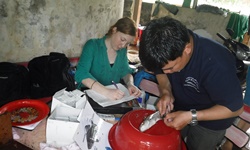 Along with contributing to the effort to understand fish migration in the Mekong, Ms Grieve said the international research experience has been personally rewarding.

"I learnt how to effectively PIT tag fish in hot and humid conditions, working in teams where not everyone is from the same culture nor speaks the same language," she said.

"It has taught me how essential international collaboration is on improving global understanding of big issues such as the lack of information on fish movement and migration in the Mekong."

Ms Grieve has been awarded a position in Sydney Water's four-year graduate program.

"I hope to use my international experience and new found knowledge of fish and PIT tagging to, one day, improve Australian inland fisheries and mitigate the impacts of human water use and barriers on local fish populations," Ms Grieve said.

Ms Grieve graduated with a Bachelor of Science (Honours) at a ceremony in Albury on Tuesday 13 December.