A leading indicator of climate change - the total area of sea ice in the Arctic region - has been declining in recent years, according to a Charles Sturt University (CSU) academic.

A leading indicator of climate change - the total area of sea ice in the Arctic region - has been declining in recent years, according to a Charles Sturt University (CSU) academic.
Strategic Research Professor at CSU’s Institute for Land, Water & Society (ILWS), Professor Kevin Parton, says the key point is to examine the extent of Arctic sea ice when it reaches its minimum annual level in mid-September each year.
“There is an annual cycle in the Arctic sea ice with the maximum area being reached at the end of winter in March. Then the ice melts each year between March and September when the minimum area is reached in mid-September,” Professor Parton said.
The graph below shows the part of the cycle tracked between March and September from 1970 to 2004 (grey line), and compares the tracking for 2007 when the minimum area of sea ice was observed (broken green line), and the tracking so far in 2008 (blue line). 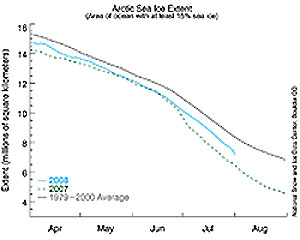 Source: National Snow and Ice Data Center
“This year started with a larger area than 2007, but the rate of reduction during 2008 has been more rapid until the last month or so,” Professor Parton said. “Fortunately there has been some recent stabilisation and the area of sea ice is now larger than at the equivalent period last year.”
The questions that scientist are pondering are why is the Arctic sea ice disappearing, and what will be the eventual impact?
“Part of the explanation for the disappearance is that the nature of the earth’s atmosphere and oceanography is such that a small increase in global temperature leads to a large increase in temperatures at the poles. As a consequence, some areas near the North Pole are already observing temperature increases up to five degrees Celsius.
“Another effect that leads to faster increases in local temperatures in the Arctic is the positive feedback loop that is established when the Arctic sea ice melts. As the ice melts, the surface area that is light in colour, and so reflects the sun’s radiation, is reduced. When the darker sea is exposed, more of the sun’s radiation is absorbed, and so there is a greater heating which leads to further local temperature increases in the Arctic.
“Until recently, scientists considered that it would be many years before we would get to a situation where there was no Arctic sea ice remaining at the end of the northern summer in September. While it is now unlikely, projections in July showed that the level of Arctic sea ice in 2008 could fall below the record reached last year. If this occurred then we may get to zero Arctic sea ice within four or five years,” Professor Parton said.
Further consequences of zero Arctic sea ice could be dramatic. The possible feedback impact on temperatures in the Arctic region could lead to significantly increased acceleration of the melting of the Greenland icesheet, where melting has already been seen.
“This is important because, while the melt of the Arctic sea ice by itself will have minimal impact on sea levels, the melting of the Greenland icesheet will lead to significant sea level rise because this ice is positioned over land and not over water. The sea level could rise in the order of five metres by 2100, and such a change would be devastating on the world’s coastlines,” Professor Parton said.