The latest heatwave in south eastern Australia points to the need for comprehensive government policies and action on climate change, says a CSU expert.

CSU Professor Kevin Parton is a climate change policy researcher with the Institute for Land, Water and Society.

"Our latest research points to a growing belief in climate change by Australians, higher acceptance that it is caused by humans, and a stronger belief that there is scientific consensus on the issue.

Professor Parton believes that strong policies are urgently needed to mitigate and adapt to climate change.

"If we take a long-term view, we need will need to mitigate and adapt to these extremes of heat as well as fire and flood, all of which seem to be upon us at an ever increasing rate. 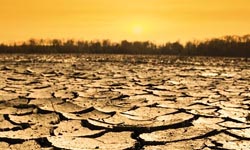 "Adaptation needs proactive approaches at all levels of government, business and non-government organisations.

"Among the mitigation strategies available to Australia is a carbon pricing scheme that will encourage energy generators and carbon producing firms and services to limit emissions of greenhouse gases.

"This in turn will reduce the 'greenhouse effect' and so reduce global warming and climate change.

Professor Kevin Parton is based at CSU in Orange, contact CSU Media to arrange interviews.