Finding the right mix for people and Nature

A team including a researcher from CSU has found that as Melbourne grows, it is better for many native bird populations to increase human numbers on existing urban land, rather than to continue the urban sprawl on Melbourne’s urban fringes.

* Land clearing for urban development has a massive influence on the native animal species that survive around urban areas, including Melbourne.

* CSU led research has found land sparing rather than land sharing is best for many populations of native birds, particularly as Melbourne grows.

A team including a researcher from Charles Sturt University (CSU) has found that as Melbourne grows, it is better for many native bird populations to increase human numbers on existing urban land, rather than to continue the urban sprawl on Melbourne’s urban fringes.

The findings were released in the latest issue of Biodiversity and Conservation.

“When you clear land for urban infrastructure like factories, shops and roads, you take away extensive habitat for many birds and this reduces their numbers,” said Professor Nimmo, a member of the CSU Institute for Land, Water and Society.

“We looked at land sharing, where we have low density housing, allowing more trees within our residential areas including household gardens, and land sparing, where the human population is housed in a smaller area, allowing for larger tracts of natural habitat such as forest and grasslands to be set aside for nature conservation,” Professor Nimmo said. 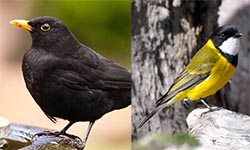 “We then looked for the best approach to accommodating the human population while maximum bird diversity in and around urban areas.”

“Our modelling showed that human population density had a large effect on the 28 species of birds reported. For the current population size of Greater Melbourne, we found a mix of land sharing and land sparing was best.

“However, as Melbourne’s population grows, land sparing clearly showed better results, particularly for the urban avoiders and urban adapters. They need large tracts of natural or semi-natural land as they depend on these habitats for food and safe nesting places.”

The research team, with members from Charles Sturt, La Trobe and Deakin universities, surveyed birds in 28 landscapes across Greater Melbourne, each landscape plot comprising 25 hectares. Human populations varied between zero and 1,600 persons on each plot.

“As Melbourne and other large metropolitan areas continue to expand, governments and land planners need to protect large tracts of natural areas on urban fringes from clearing to protect native birds and other animal species.

For interviews and pictures with Associate Professor Dale Nimmo, based at CSU in Albury-Wodonga, contact CSU Media.