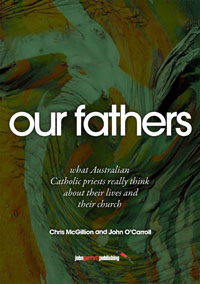 A new book by Charles Sturt University (CSU) academics, launched today, Friday 25 March, presents surprising data from the first-ever survey of Australian Catholic priests made public.
The written survey, interviews and the resultant book, Our Fathers, are by Mr Chris McGillion, senior lecturer in journalism at the School of Communication and Creative Industries, and Dr John O’Carroll, lecturer in literature and cultural studies at the School of Humanities and Social Sciences in Bathurst.
The authors say the purpose of the book is to present the views of parish priests on a range of issues of vital interest to the Catholic Church and wider community in Australia.
“Studies of this kind are reasonably common in the United States, and one was done in the United Kingdom about 15 years ago, but nothing like this had been done for public consumption in Australia,” Mr McGillion said.
“Priests dedicate themselves to a lifelong commitment to the Church and the exploration of its teachings and how these impact on Catholics and non-Catholics alike. Their everyday work involves dealing with a range of problems, and we wanted to capture the insights gained from this wealth of experience and make them available to a wider audience.
“Some questions we asked concerned the nature of the priesthood itself, such as ‘what motivated priests to join the priesthood?’, while other questions concern the Catholic Church more broadly.
“Priests gave us replies that were amusing, surprising, even confronting, but what they had to say was rarely entirely predictable. More to the point, their responses combine to offer a rival interpretation of the state of the contemporary Catholic Church to most of those conventionally presented in studies on the subject.”
Dr O’Carroll said, “For some time I have been interested in the way Australian priests participate in Australian culture today, as well as in the past. The priests told us many fascinating stories about that aspect of Australian history.
“The parish priest, as most people imagine him, is an endangered species in Australia (see Media Note). The fact that this book is the first of its kind in Australia, and that it has been undertaken by two researchers who have no official or ongoing connection with the church, suggests the hierarchy has not bothered, or is reluctant, to understand its most critical personnel.
“Many observers will be heartened that 90 per cent of priests said their life as a priest had been fulfilling, and they might find it interesting that 70 per cent said that celibacy should be optional for priests. They may also be concerned that 47 per cent found their workloads excessive, and that only about 35 per cent agreed that bishops were doing a good job of managing the Church in Australia. Clearly, there is division and discontent among Australian priests.”
The authors hope that by publicising the thoughts and feelings of priests, the book might unlock a conversation between Australian Catholic bishops, priests and laity that some might argue needs to happen.